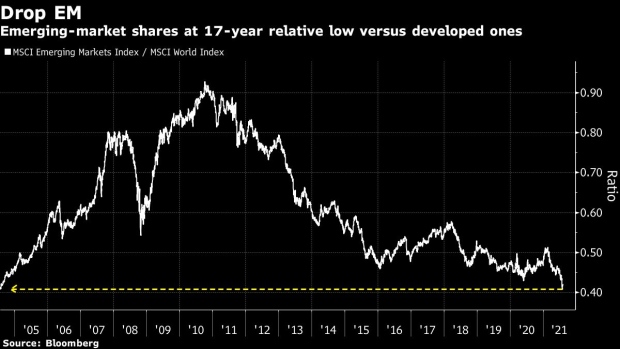 (Bloomberg) -- Increased investor concerns about China and a widening vaccination gap will keep pressure on emerging-market assets relative to their developed peers, according to some market participants.

China’s sweeping clampdown of its technology sector at a time when its economy is slowing has helped push a global gauge of emerging-market shares to a 17-year relative low against their developed-market peers. The spread of coronavirus variants has also weighed, with vaccine rollouts in developing nations lagging those in the likes of North America and Europe.

The MSCI Emerging Markets Index -- with about a third of its weight in Chinese names -- briefly fell into negative territory for the year last week, while the MSCI World Index of developed-market stocks is up about 15%.

The MSCI Emerging Markets Currency Index has fallen more than 1% from a record in June while the U.S. dollar has advanced -- a traditional headwind for developing nations.

The souring sentiment toward emerging markets comes after the cohort dominated growth in the closing months of 2020 and the start of this year. Investors piled into economically-sensitive stocks in the so-called reflation trade after China became the first major economy to rebound from the pandemic.

Now China has become somewhat of a pariah as it clamps down on private enterprise it blames for exacerbating inequality, increasing financial risk and challenging the government’s authority. Meanwhile, the world’s second-largest economy is suffering its own outbreak of the delta variant prompting analysts to lower their economic growth projections as risks escalate.

The highly-infectious variant has spread to nearly half of China’s 32 provinces in just two weeks. At least 46 cities have advised residents to refrain from traveling unless it’s absolutely necessary.

“We’ve been neutral on emerging markets for some time now driven largely by a mix of tight policy and waning momentum in China,” said Patrik Schowitz, global multi-asset strategist with JPMorgan Asset Management. “The latest Covid developments add to our caution and further cloud the overall outlook for emerging markets.”

Still, investors aren’t abandoning emerging markets completely, especially given the importance of China’s large and liquid market. The nation’s benchmark CSI 300 Index rose as much as 2.7% on Monday, the most since May. Traders piled a net $975 million into Chinese exchange-traded funds last week, more than all other developing nations tracked by Bloomberg combined.

Unequal access to vaccines is further widening the recovery gap between advanced and developing economies, the International Monetary Fund warned late last month. It reduced its growth forecast for emerging-market economies to 6.3% from 6.7%, while raising estimates for advanced ones by 0.5 percentage point to 5.6%.

While the percentage of population fully vaccinated has risen to around 50% for the U.S. and European Union, it’s about 20% for Brazil, 8% for India and Indonesia, and just 4% for the Philippines.

The accessibility of vaccines has a direct impact on the pace of reopenings across countries and is a key issue for investors, said Zijian Yang, head of multi-asset Asia Pacific with Allianz Global Investors.

“Going forward, it boils down to which countries can effectively immunize their population as early as possible, against unknown elements such as new variants of the virus,” he said. “From that perspective, developed markets are indeed outperforming emerging markets at the moment.”