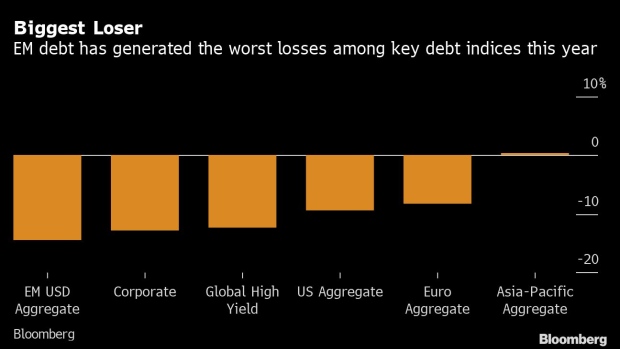 The money manager, which has $17 billion in emerging-market assets, is holding 25% of its emerging-market funds in cash, up from a normal level of 3% to 5%. Michael Arno, a Philadelphia-based money manager at the firm, said he’d rather let inflation eat into the funds’ holdings than risk bigger losses in EM bonds, which are struggling to compete with US Treasury yields.

“There are a lot of headwinds so we are being more cautious and not investing the cash we have currently,” Arno said, referring to EM-only mandates. “If valuations were attractive in cash bonds then we would invest that cash, but they aren’t given some of the headwinds.”

While flight to safety is a repeated theme amid the global selloff in risk assets, such high cash holdings may still be exceptional. For instance, a BlackRock Inc. emerging-market bond fund had 7.5% in cash as of March 31, according to a company spokesperson.

With U.S. inflation likely to be 6.9% this year, according to Bloomberg estimates, and the prospect of more rate increases almost a certainty, EM sovereign bonds still aren’t attracting many money managers. Bank of America strategists said that more than $5 billion left EM bond funds in the week to May 11, the largest outflow since April 2020, citing EPFR Global data. In a separate note, the bank’s strategists said they’re pessimistic about EM’s outlook. If there’s a rally, they recommend selling, because generally speaking, the selloff in EM is only “half-way” done.

“People often talk about the drag of holding cash given inflation right now,” Arno said. But while inflation at current levels is reducing real returns on cash by about 7%, JPMorgan’s benchmark emerging-market benchmark index is already down 17% year-to-date, he added.

Out of 1,121 emerging-market bond funds, only 82 have been able to beat cash this year amid a global selloff that hit developing nations harder, according to data compiled by Bloomberg.

“EM hard currency spreads are cheapening up but they are not super cheap,” Arno said. “We are not seeing super attractive valuations right now. You need to see some stabilization in Treasuries and China’s zero Covid policy to get excited.”