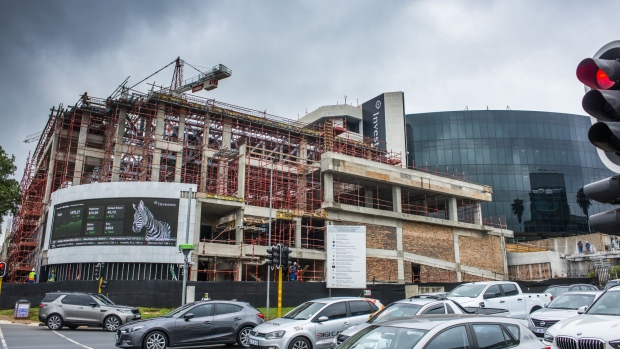 Construction work on a building near an advertising board showing Hang Seng Index stock price information in the Sandton district of Johannesburg, South Africa, on Thursday, Nov. 12, 2020. Jobs were at the center of a post-virus reconstruction and recovery plan presented by President Cyril Ramaphosa last month, with the government committing 100 billion rand ($6.37 billion) to create public and social employment opportunities. , Bloomberg

(Bloomberg) -- It may come down to another pharmaceutical breakthrough to set the tone for emerging markets headed toward 2021.

Developing-nation stocks, currencies and bonds rose for a third week in the five days through Friday as the prospect of a coronavirus vaccine rollout in the months ahead outweighed concern that rising infections would lead to tougher curbs in the nearer term. Underscoring investor optimism, a measure of implied volatility for currencies fell to the lowest in almost four months.

Emerging markets are set to outperform the rest of the world as a global economic rebound takes hold starting in the second quarter, according to Goldman Sachs Group Inc. With reduced political uncertainty following the U.S. election and the potential for more positive vaccine updates, analysts and investors from BlackRock Inc. to JPMorgan Chase & Co. and Morgan Stanley have been flagging opportunities in risky assets that have trailed peers.

Investors should “move into pro-cyclical positions heading into year-end instead of waiting for economic data to turn more meaningfully,” Goldman analysts, including Andrew Tilton and Kamakshya Trivedi, wrote in a report. The market is likely to “defer difficult questions around vaccine production and distribution for later.”

Findings from the final stage of AstraZeneca Plc’s vaccine studies are due to be released shortly, following the trial successes from Pfizer Inc. and Moderna Inc. The stakes for lower- and middle-income nations are immense as the Astra vaccine costs a fraction of the price set by Pfizer and will be manufactured in multiple countries, from India to Brazil.

Staring down more than $17 trillion of negative-yielding debt worldwide, investors will continue to be drawn to the higher returns offered by emerging-market assets as global central banks show little willingness to scale back their unprecedented economic-support policies. Minutes of the Federal Reserve’s Nov. 4-5 meeting will show how policy makers view adding to stimulus.

Still, the prospect of an economic recovery in the developing world may have been factored into prices, and investors are concerned about the sharp increase in average fiscal balances and debt burdens this year, said Paul Greer, a money manager in London at Fidelity International. South Africa fell deeper into junk territory after Moody’s Investors Service and Fitch Ratings lowered the country’s credit ratings on Friday as the pandemic pummeled the government’s finances and pushed the economy into its longest recession in almost three decades.

“EM debt still offers attractive risk premium for bond investors that cannot be ignored in an increasingly income-hungry, low inflation and low interest-rate world,” Greer said. “The story into 2021, however, remains clouded and much will depend on the evolution of the virus-versus-vaccine trajectory.”

With the data calendar light this week, central bank decisions in South Korea, Nigeria and Colombia will be in focus, after Indonesia and the Philippines surprised by cutting benchmark rates last week. Inflation data from South Africa, Brazil and Mexico will be also closely watched.