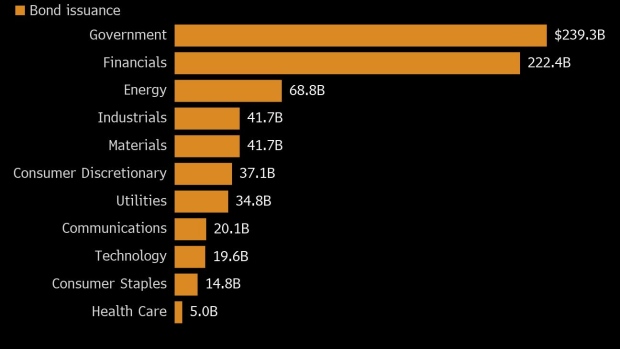 (Bloomberg) -- The amount that developing-economy issuers borrow in the world’s biggest debt markets is expected to slow as interest rates rise and extraordinary pandemic spending is scaled back, dragging bond sellers back down to Earth after a Covid-fueled rocket ride.

Governments and companies in emerging markets raised $745 billion in dollar, euro and yen bonds as of Dec. 7, making 2021 the second-best year for issuance in Bloomberg-compiled data going back two decades. But even with a flood of new deals coming as borrowers race to refinance while interest rates are still low, it’s unlikely that this year’s volume will top 2020’s record of more than $771 billion.

From here, the trend line is stabilizing -- or possibly pointing down.

Emerging markets borrowed more heavily than ever in 2020, as the pandemic forced cities to shut down, strangled economies and sent authorities searching for funding. They now face at least about $478 billion in dollar, euro and yen-denominated debt principal that matures next year, according to data compiled by Bloomberg.

Extra attention was on Chinese bond sellers in 2021 amid China Evergrande Group’s debt troubles and the risk of a spillover to other issuers. Despite losses in some Chinese real estate sector notes, corporate deals enabled the country to comprise about 25% of the total hard-currency issuance in emerging markets this year, according to data as of Dec. 7.

The lower level of sovereign debt sales this year and next represents a return to trend after the anomaly of 2020, said Cristian Maggio, head of portfolio strategy at Toronto Dominion Bank in London.

Part of the reason for lower expected borrowing is the anticipation of tighter monetary policy from the Federal Reserve and other major developed central banks. In addition, many economies have reopened or are at least starting to recover, allowing governments to keep paring back fiscal stimulus. Of course, variants of the coronavirus remain a threat.

Higher U.S. Treasury yields and oil prices also tend to correlate with less emerging-market issuance, especially for investment-grade sellers, according to Goldman Sachs. And the dispersal of $650 billion in special-drawing rights from the International Monetary Fund offers some governments an alternative source of financing.

There are also signs that the pool of emerging-market bond buyers could increase next year, even if some are wary of the losses new bonds suffered this year, adding pressure to already lighter supply.

“We expect strong support from crossover investors into EM debt due to a shortage of U.S. and EUR bonds in the corporate markets,” said Bank of America Securities Inc. strategists Jane Brauer and Lucas Martin in a note from late November.

Sustainable debt sales in Chile helped make the Latin American nation the largest government seller of foreign bonds this year, raising more than $16 billion worth of dollar and euro debt that -- for all but a few notes -- won’t come due for at least a decade.

It was a standout year for debt with proceeds earmarked for environmental, social or otherwise sustainable spending. Governments and companies sold $82.3 billion as of Dec. 7, the most ever for any full year. It was an 180% increase from all of the ESG hard-currency debt sold in developing economies in 2020, according to data compiled by Bloomberg.