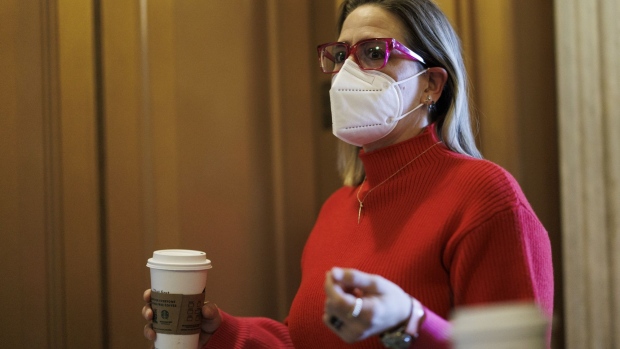 Senator Kyrsten Sinema, a Democrat from Arizona, arrives to the U.S. Capitol in Washington, D.C., U.S., on Wednesday, Jan. 19, 2022. Senate Democrats edged closer to handing the White House another defeat as the chamber took up voting-rights legislation with extraordinarily long odds in the evenly divided chamber. , Bloomberg

Sinema has long opposed eliminating the Senate filibuster so that a simple majority could pass legislation, although she claim supports provisions to expand and protect access to voting. The Senate is debating the bill but without a change to the rules it is all but sure to fail to advance.

Senator Joe Manchin is the only other Democratic senator who has said he would not vote to change the rules.

The two groups are key funders for candidates that support abortion rights and backed Sinema when she first ran in 2018. She is not up for reelection until 2024, however.

“Electing Democratic pro-choice women is not possible without free and fair elections,” EMILY’s List president Laphonza Butler said in a Jan. 18 statement. “Protecting the right to choose is not possible without access to the ballot box. So, we want to make it clear: if Sen. Sinema can not support a path forward for the passage of this legislation, we believe she undermines the foundations of our democracy, her own path to victory and also the mission of EMILY’s List, and we will be unable to endorse her moving forward.”

EMILY’s List was previously  Sinema’s largest supporter, donating an estimated $485,000 to her congressional and senatorial campaigns.Also on Tuesday, NARAL Pro-Choice America said it would no longer endorse or support senators who did not approve of the rules change.

“Without ensuring that voters have the freedom to participate in safe and accessible elections, a minority with a regressive agenda and a hostility to reproductive freedom will continue to block the will of the majority of Americans,” president Mini Timmaraju said.Republicans are expected to block a final vote on passage of the legislation when debate ends Wednesday evening. At that point Senate Majority Leader Chuck Schumer said he will propose a one-time change in the filibuster rule. But with Manchin and Sinema opposed, that would fail, leaving Democrats with no immediate path forward.

“While I continue to support these bills, I will not support separate actions that worsen the underlying disease of division infecting our country,” Sinema said on the Senate floor last week. “The debate over the 60-vote threshold shines a light on our broader challenges.”

Some Democratic activists have already vowed to defeat Sinema in her 2024 primary over her opposition to changing the Senate rules.