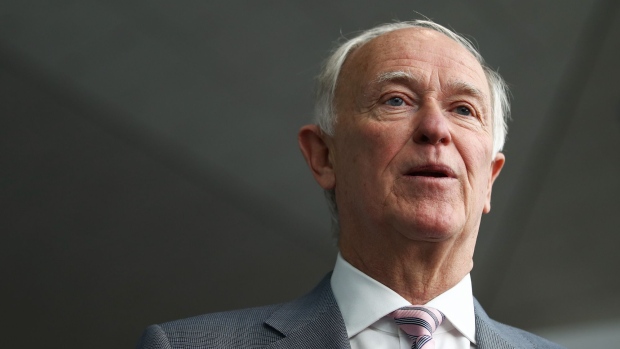 Tim Clark, president of Emirates Airline, speaks during a Bloomberg Television interview at the International Air Transport Association (IATA) annual general meeting in Sydney, Australia, on Tuesday, June 5, 2018. Emirates said any merger plan with Abu Dhabi's Etihad Airways PJSC is for shareholders to decide and no such development is likely any time soon. , Bloomberg

(Bloomberg) -- Emirates President Tim Clark postponed his retirement into next year to help steer the world’s largest long-haul airline through the toughest crisis in its history, according to people familiar with the matter.

The 70-year-old, who had already delayed a June retirement plan, hasn’t yet set a departure date, said the people, who asked not to be identified as the decision hasn’t been made public. Emirates hasn’t yet named a successor.

Clark has been the architect of Emirates’ rise from desert outpost to the world’s largest long-haul carrier, with the biggest fleet of Airbus SE A380s and Boeing Co. 777s connecting destinations around the globe through its Dubai hub. Yet just as he was due to the hand over the tiller, the Covid-19 pandemic plunged the global aviation industry into a prolonged slump that shows little sign of coming to an end.

Emirates has had to cut thousands of jobs, idle the majority of its A380 fleet and defer jet orders. The carrier’s focus on lengthy international flights is particularly vulnerable as travelers shy away from long-distance travel, which is expected to recover more slowly than shorter journeys.

Clark has referred to the pandemic as both a glitch and the industry’s black swan, meaning a devastating and unpredictable event, yet still believes an upturn is possible once there’s a vaccine in place. He’s been president since 2003, having been part of Emirates founding executive team from 1985.

“I know what we did in the building of Emirates, and I know how the markets, particularly on the network basis, responded to what we did,” Clark said this month.