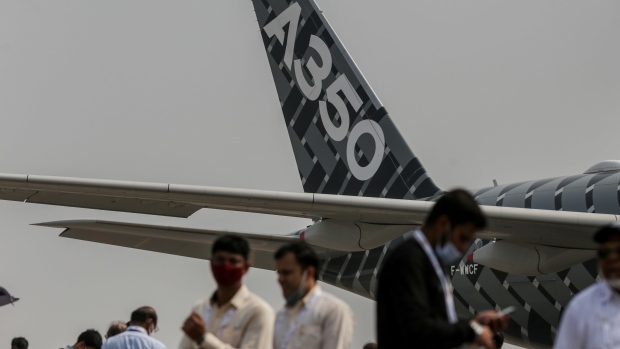 The tail of an Airbus SE A350 aircraft at the Wings India 2022 Air Show held at Begumpet Airport in Hyderabad, India, on Thursday, March 24, 2022. The air show runs through March 27. , Bloomberg

Gulf carrier Emirates said it’s in talks to take delivery of A350 wide-body jets ordered from Airbus SE over a shorter period amid continuing uncertainty around the handover of Boeing Co.’s delayed 777X model.

With the American plane now not due to commence deliveries until 2025, Dubai-based Emirates is looking to accelerate A350 arrivals once the first example from a 50-strong order is shipped, most likely in late summer 2024, Tim Clark, the airline’s president, said Monday in Doha.

“We’re talking to Airbus about compressing the delivery scale so we probably get up to two a month,” Clark said in a briefing at the International Air Transport Association’s annual meeting in the Qatari capital. “We’re trying to get this whole lot done in two years to pick up this big capacity.”

Boeing in April put back 777X deliveries to 2025, five years later than originally planned, and said it won’t resume production until 2023, prompting some plane-leasing firms to suggest that the future of the re-winged and re-engined evolution of the popular long-haul model is in doubt.

Clark said Emirates now has a tentative deadline of July 2025 for deliveries of the 777X, for which it has more than 100 orders. The world’s biggest long-haul airline first ordered the plane in 2013 for deliveries that were scheduled to begin in mid-2020.

The executive said he’s not convinced that Boeing’s new delivery target will be met and that the situation regarding the plane’s General Electric Co. engines is particularly confused, with the turbine yet to be subjected to scrutiny from Emirates, “let alone the flight test program.”

Clark said that he’ll quiz the Boeing on the detailed timeline at a meeting in Dubai scheduled for next week. “Beyond that if it doesn’t get there, it’ll have serious repercussions,” he said.

Emirates has meanwhile taken steps to upgrade the current fleet while it waits on the new planes, with existing 777s to be retained and fitted with four-class cabins, including the carrier’s new premium economy offering. The world’s largest fleet of A380 superjumbos is also being returned to service and will remain active until the mid-2030s, Clark reiterated.