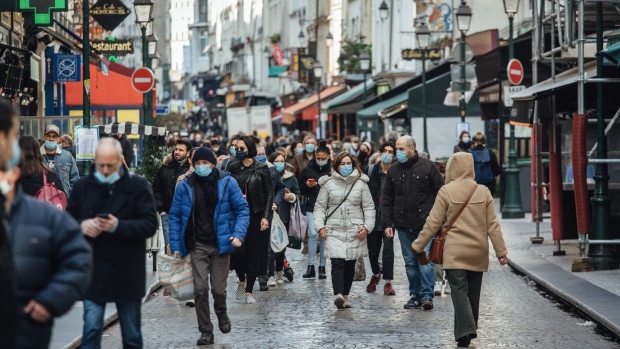 Pedestrians crowd Rue Montorgueil ahead of a new lockdown in Paris, France, on Friday, March 19, 2021. French President Emmanuel Macron is locking down several regions including the Paris area, slowing down the country’s economic recovery as it struggles to contain a third wave of the coronavirus epidemic. , Bloomberg

(Bloomberg) -- French President Emmanuel Macron will reassess the country’s recovery plan in September, possibly adding to the 100 billion euros ($120 billion) of stimulus his government is already injecting into the economy.

Such a boost would arrive just six months before presidential elections, where management of the health crisis and the growth rebound are set to be key battlegrounds. Before any decision, the government will first consult with local political leaders over the summer, Finance Minister Bruno Le Maire said on Monday.

“We will see at that point if it is useful or not for the country -- and that is the only gauge -- to add money to the recovery fund,” Le Maire said on French radio RTL.

France was one of the quickest European countries to resort to investment and tax cuts that go beyond the initial crisis support for firms and households. While other states are waiting for European Union cash later this summer, the French government plans to use that financing to cover what it has already disbursed since September 2020.

French officials have repeatedly criticized the region in recent months for moving too slowly to rebuild the economy at a time the U.S. is streaking ahead. At a European summit in March, Macron warned the bloc must learn from the crisis, simplify its procedures and go “faster and stronger.”

The president has still come under fire from opposition parties at home for not doing enough to support households and fuel demand with his recovery plan.

Le Maire said the quick deployment of the national plan, with about a third of the 100 billion euros already spent, has helped France avoid the economic contraction seen in other major European economies this year. His ministry will phase out crisis support for businesses only gradually as it strives to drive economic growth to 5% this year.

“Every day I’m battling to make sure the recovery is working well and we will meet this target of 5% growth in 2021,” Le Maire said.