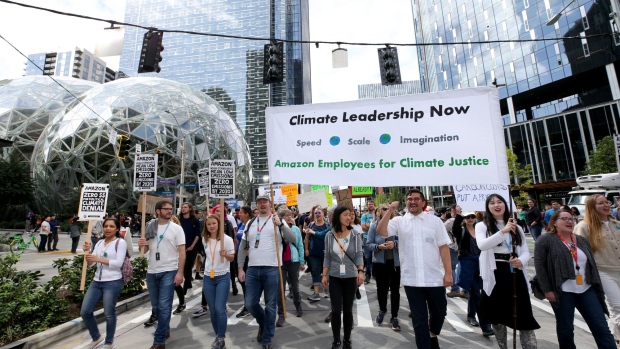 (Bloomberg) -- One of the most exciting fields in climate science at present is attribution studies: investigating the extent to which climate change can be blamed for raising the odds of specific weather conditions, such as heatwaves and drought.

There’s another climate attribution issue out there, though, that’s potentially more important: understanding what causes individuals, businesses and governments to change their policies on climate in favor of the more dramatic emissions reductions the world needs. That’s an important backdrop to Amazon.com Inc. founder Jeff Bezos’s announcement last week that he would give $10 billion to climate researchers and activists.

Amazon and Bezos have historically been strong on messaging but weak on execution where climate change mitigation is concerned. Despite announcing a long-term goal to power all of its data centers via 100% renewable energy in 2014, it’s well behind its tech sector peers on this front. To the extent that’s changing, a lot can be put down not to external activists, executive ambition, or even shareholder pressure, but rather to employees.

Late in 2018, a group of mostly software engineers started organizing a shareholder resolution on climate issues to bring to Amazon’s annual general meeting in May of the following year. Many had vested equity, which qualified them as shareholders. Two outside advisory firms recommended the measure, giving it an added boost of credibility. In the end, the resolution was voted for by investors owning 30.9% of the company’s shares—a decent result considering Bezos himself owns 11% and company management opposed the resolution, but short of the required 50%.

The employees didn’t give up. When Bezos announced new targets for renewable energy use and emissions reductions in September, a day before some were planning to join the global climate strike that drew over 1 million participants around the world, it appeared to be in response to their efforts.

They’ve been less successful on some other goals, in particular a push to stop Amazon’s providing cloud services to the oil and gas industries. But the extent to which they’ve pushed one of the world’s most powerful chief executives towards change has been impressive.

Could this achievement be repeated in other industries? The tech sector is probably uniquely susceptible to such interventions: Statistical and IT jobs are some of the fastest-growing segments of the U.S. white collar workforce, so employers are especially wary of driving staff away.

Investment banking is similarly generous in terms of compensation and also provides a crucial service to carbon-intensive industries: finance. Still, with job cuts in recent quarters numbering in the tens of thousands and a far slower pace of forecast employment growth, employees are likely to feel much less secure. The culture of financial services is also not famous for encouraging employees to speak out, especially in areas where it might interfere with winning business from major clients.

That culture is far from impregnable, though. Finance thrives on making persuasive predictions about the future, and the arguments in favor of aggressive action to prevent climate change get stronger by the day. That’s especially the case when major polluting sectors are struggling to make money. With the U.S. coal sector stricken by repeated waves of bankruptcy and the shale oil business persistently failing to cover its costs of capital, the attack on fossil fuels is increasingly happening on purely economic grounds.

There’s also what economist Robert Frank, in a recent column for the Washington Post, described as “behavioral contagion”—that is, peer pressure. Some of these individual commitments on climate—such as the recent ones by Bezos, or BlackRock Inc.’s Larry Fink, or BP Plc’s Bernard Looney­—may lack the level detail or ambition that would satisfy campaigners, but they serve to raise the salience of the issue in the minds of other businesses and encourage them to make and meet more ambitious pledges of their own.

Many people—myself included—thought the fossil fuel divestment campaigns that kicked off in 2012 and 2013 were naive and would never actually move the needle in terms of reducing capital costs. Just a few years later, however, it’s clear that thermal coal companies are struggling to get financing. Some of this is undoubtedly due to the economics of alternative sources of energy, rather than any campaigns or moral imperative, but there’s more to it than that. Many investment professionals have told me over the years that divestment campaigns got the attention of more senior executives, which in turn led to a more serious examination of the losses fossil fuel investments might sustain as markets opted for lower-emission alternatives. Once those “transition risks” had been assessed, they were hard to ignore.

That’s why employees should consider following the example of the Amazon group. If our world is going to make the huge changes in our energy and agricultural systems needed to limit global warming, it’s going to need pressure not just from shareholders, activists and regulators, but from every side. With more and more businesses waking up to the need to do more in the years ahead, those who speak up may well find they’re pushing at an open door.

To contact the author of this story: Kate Mackenzie in Sydney at kate@katemackenzie.net

To contact the editor responsible for this story: Jillian Goodman at jgoodman74@bloomberg.net