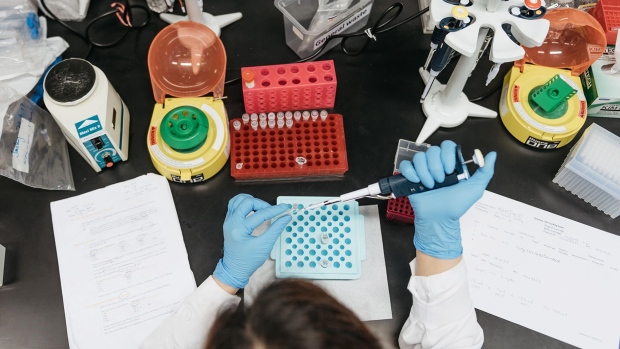 A technician prepares a sample inside a laboratory in Hong Kong. , Photographer: Anthony Kwan/Bloomberg

(Bloomberg) -- Employers and health plans fear they could be swamped financially by a coming wave of expensive new genetic therapies for rare diseases.

Regulators have recently approved two treatments that sell at many multiples of the prices of routine treatments for more common conditions. A Novartis AG drug for a fatal muscle-wasting disease that kills children in infancy costs $2.1 million for a one-time treatment. Another gene therapy for a hereditary form of blindness made by Spark Therapeutics Inc. costs $425,000 per eye.

Large health plans may be able to absorb those prices for now because the drugs are meant for a small number of patients; currently only a few hundred people a year in the U.S. could benefit from them. But with more similar drugs expected to reach the market in coming years, for a range of diseases and chronic conditions, the burden on health plans is likely to increase. The Food and Drug Administration expects to approve between 10 and 20 gene and cell therapies each year by 2025.

New gene therapies are just one component of the relentless rise in employers’ medical costs, which are projected to climb 6% next year, according to PwC’s Health Research Institute.

In a survey of large employers published in August by the National Business Group on Health, 86% said they were concerned or very concerned about the impact of million-dollar treatments being approved by the FDA.

Insurers are already preparing for an onslaught of pricey new treatments. Cigna Corp. said this month it will sell insurance to pick up the tab when a patient takes a gene therapy. Employers or other plans would pay a monthly per-member fee, and in exchange Cigna would assume the risk of paying for drugs like Zolgensma, Novartis’s $2.1 million medicine for spinal muscular atrophy.

Most large employers and many small ones bear the risk of their employees’ medical costs directly, an approach known as self-insurance or self-funding. They rely on insurance carriers to design benefits and administer claims but pay the costs themselves. Some companies, especially smaller ones, buy re-insurance plans as an additional buffer against high-cost claims.

Cigna wants employers to unload the risk of a seven-figure gene-therapy claim in exchange for a monthly fee of perhaps less than $1 per month per member.

“You have total predictability about what your cost of coverage is going to be,” said Steve Miller, chief clinical officer at Cigna. Patients would have no out-of-pocket charges, he said.

Still, employers may be wary.

“Employers, when they’re assessing any program, would want to know the cost-benefit, and to ensure that it’s not just adding on a layer of cost,” said Ellen Kelsay, chief strategy officer at the National Business Group on Health, which represents large self-insured employers. “Are they negotiating with the manufacturer in any way to bring the baseline cost down?”

Miller declined to say whether Cigna secured discounts on Novartis’s Zolgensma or Spark’s blindness treatment Luxturna, but he said that the goal was to amass bargaining power. Miller said Cigna hopes to launch the plan, called Embarc, in 2020, with 10 million members, a number he expects to get through existing clients of Cigna and its pharmacy-benefit manager, Express Scripts.

Spark is still in “exploratory” discussions with Cigna and “has made no commitment to include Luxturna in this offering,” Spark spokesman Kevin Giordano said in an email.

The Novartis subsidiary that developed Zolgensma hasn’t yet agreed to any discounts for the program, spokeswoman Farah Speer said in an email.

“It might raise some questions of, well, aren’t I paying you already to help me manage these things?”she said.

Products like Cigna’s gene-therapy plan may be valuable for smaller companies that want to protect against the low-probability, high-impact claims, said Mike Stull, chief strategy officer at Employers Health, a purchasing group of more than 200 employers that together insure about 1 million people.

Some self-insured businesses already buy separate insurance to cover organ transplants, Stull said, another uncommon but expensive intervention. “Employers need to find a way to spread the risk for these types of therapies,” Stull said.

No one has a clear answer for how to absorb the costs of potentially dozens or hundreds of gene therapies if they have prices in the same range as Zolgensma and Luxturna – and potentially larger populations of eligible patients, who may need to take such therapies more than once.

“There’s no free lunch,” Rothstein, the union health-fund director, said. “You can sort of shuffle the costs around a little bit, but not that much.”

The looming problem is big enough that some employers want the government to intervene. In the NBGH survey, 46% of employers said they’d welcome government involvement in managing high-cost drugs.

There’s some precedent for that. In response to growing concern about the costs of life-saving kidney dialysis and transplants, Congress added coverage for end-stage renal disease to the Medicare program in 1972.

To contact the reporter on this story: John Tozzi in New York at jtozzi2@bloomberg.net