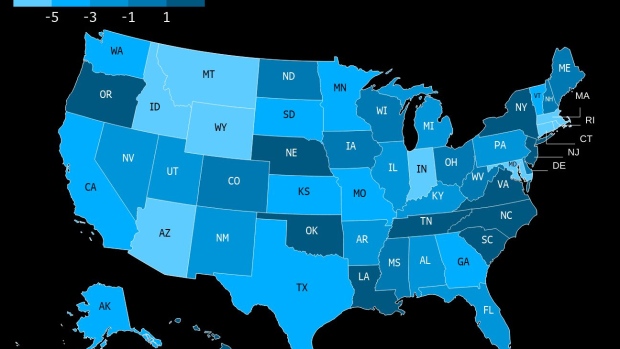 (Bloomberg) -- Americans’ views about whether the Covid-19 outbreak is expected to zap employment income are diverging among states.

The Census Bureau on Wednesday released the first results of its experimental weekly Household Pulse Survey, which compared responses made May 7 through May 12 against those in the April 23-May 5 period. The survey is intended to shed light on a wide range of topics including employment, spending, housing and health.

Thirty-seven percent of adults said they expected someone in their household to lose employment income over the next four weeks, down from 38.8% in the first week of the survey.

A breakdown of state data showed the biggest one-week increase in the share expecting a loss of employment income occurred in Virginia. Just over 38% of respondents in the state expected a loss of wages, up 6.1 percentage points from the first week of the survey.

Across the Potomac River in the nation’s capital, however, wage expectations improved 10 percentage points, the biggest gain in the country, with only 22.7% anticipating lost employment income over the next month.

The survey also reflected differing state policies toward the reopening of economies as well as the effects of the pandemic on tourism. In eight states -- Hawaii, New Jersey, Nevada, New York, Louisiana, Michigan, Oregon and California -- at least 40% of respondents expected weaker employment income.

In total, however, the shares of households expecting lost employment income in the next four weeks improved in 35 states plus Washington D.C. from the initial survey week.

Households were also asked whether they were getting the food they needed, delaying medical care, paying their rent or mortgage on time and putting in more hours to teach their children.

The Census Bureau hopes the weekly survey will give government policy makers and the private sector more timely information about what’s happening among households and how the pandemic is shaping people’s lives impacted by the health crisis.