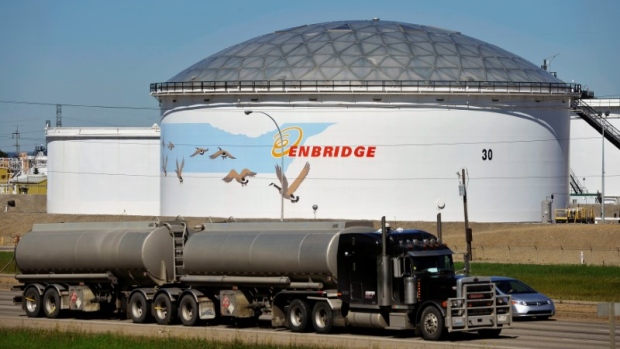 A storage tank looms over a freeway at the Enbridge Edmonton terminal in Edmonton August 4, 2012. , REUTERS/Dan Riedlhuber/File Photo

Enbridge Inc (ENB.TO) Canada's largest pipeline company, reported a smaller-than-expected quarterly profit on Friday as expenses jumped and the company said its deal to buy Spectra Energy Corp (SE.N) was on track to close this quarter.

Earnings attributable to the company's shareholders fell 3.4 per cent to $365 million, or 39 Canadian cents per share, in the fourth quarter, hurt by charges, including for asset impairment and restructuring.

Enbridge said its expenses jumped 11 per cent to about $9 billion in the three months ended Dec. 31.

Revenue rose nearly 5 per cent to $9.34 billion, edging past analysts' estimate of $9.31 billion.

Enbridge announced its deal to Spectra Energy for about $28 billion in September, and on Thursday got U.S. antitrust approval for the transaction that will create the largest North American energy infrastructure company.