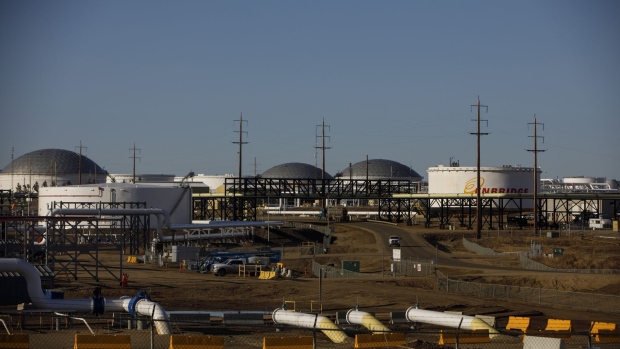 Enbridge Inc. oil storage tanks are seen in Hardisty, Alberta, Canada, on Tuesday, April 21, 2020. Since the start of the year, oil prices have plunged after the compounding impacts of the coronavirus and a breakdown in the original OPEC+ agreement. Photographer: Jason Franson/Bloomberg , Robert Tuttle

A year ago, the economy looked rosy and crude prices were riding high. Enbridge Inc. now will be getting a bit of a boost from that due to a nearly decade-old contract provision that will increase what the company charges to transport oil on Canada’s largest pipeline network.

The increase comes as the Canadian oil industry has been ravaged by the COVID-19 pandemic and pipelines out of Canada are running partly empty after oil sands producers slashed about 25 per cent of output with demand for their product waning.

Enbridge’s Mainline system, which runs from Hardisty, Alberta, to the Chicago area, ships about 75 per cent of Western Canada’s oil output. The toll on the 2.9 million barrel-a-day system from Alberta to the Chicago area will rise 18 cents a barrel, or 3.9 per cent, starting July 1, Enbridge said. The increase is based on an index of Canada’s economic growth from the prior year, a formula approved by regulators in 2011.

The Canadian economy grew 1.7 per cent last year but has contracted so far this year due to the pandemic. Still, Enbridge says the contract provision has kept prices from rising even higher.

In the past, shippers would have been forced to pay more when oil demand and volumes on the pipeline were lower. The provision “shields shippers from throughput risk which, in current circumstances with decreased oil demand and declining volumes on the Mainline, would have otherwise resulted in a significant toll increase under the previous negotiated settlement,” Jesse Semko, a company spokesman, said in an email.

Enbridge discussed the toll changes with companies that ship on the lines in the middle of May before submitting them to the Canadian Energy Regulator, Semko said.

Lower demand for oil from U.S. refineries has made exporting Canadian crude less economic. The price difference between Canadian heavy oil in Alberta versus the U.S. oil hub of Cushing, Oklahoma, is about US$4 a barrel, according to NE2 Group pricing.

That’s too narrow a difference to cover the cost of most oil shipments on Enbridge’s pipeline system at current tolls.

For years, Canadian oil producers struggled with a shortage of export pipelines. Since the coronavirus pandemic and the drastic decline in output, Canada has gone from having too few pipelines to too many. Mainline volumes are expected to be down by 300,000 barrels a day this year, according to Enbridge.

The Mainline includes several pipelines that carry light, medium and heavy oil from Alberta to Superior, Wisconsin, where they link to pipelines running into eastern Canada and South to pipelines connected to the U.S. Gulf Coast.

Enbridge’s toll increases weren’t matched by other pipeline operators. The Federal government-owned Trans Mountain Pipeline running from Alberta to the Vancouver area cut rates for shipping light crude from Edmonton to Sumas, British Columbia, by 32% on May 1. TC Energy Corp. plans to keep rates to Texas unchanged for uncommitted shipers starting July 1 on its Keystone pipeline after lowering them April 1.