Encana Corp. agreed to buy U.S. shale producer Newfield Exploration Co. in its largest-ever acquisition, inflaming investors’ ire by reversing course on a strategy of slimming down its oil and gas portfolio.

The US$5.5 billion purchase will give Encana positions in the Stack and Scoop shale fields in Oklahoma, the Bakken region of North Dakota and the Uinta play in Utah, creating North America’s second-largest shale explorer, the companies said in a statement on Thursday.

Yet Encana’s stock plunged over concerns the all-stock deal will dilute investors and saddle the driller with unfamiliar assets after years of whittling the portfolio to a handful of U.S. and Canadian fields. The company's TSX-listed shares slid 12.20 per cent - or $1.64 - to close Thursday trading at $11.80.

“While we see the strategic and financial merits in the acquisition, we suspect it will take some time for the market to digest this transaction and the addition of a new play to the company’s portfolio,” Chris Cox, an analyst at Raymond James & Associates Inc., said in a note. 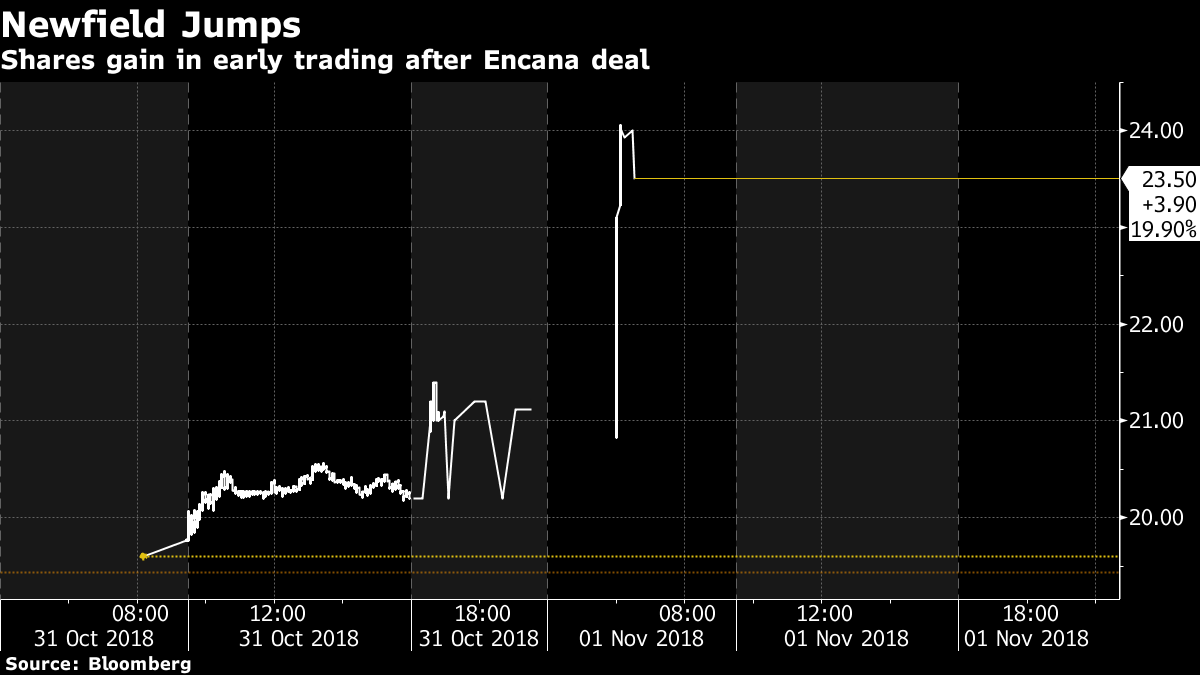 The acquisition signals a sea change for North American oil producers that spent the last few years building so-called pure-play drillers focused on a single shale region such as the Permian Basin in West Texas and New Mexico. It also pushes deal-making this year among North American oil producers to a four-year high of US$135.9 billion, following major acquisitions by BP Plc, Concho Resources Inc. and Chesapeake Energy Corp.

The deal surge may continue into 2019, with Tudor Pickering Holt & Co. saying it sees more than 10 acquisitions representing about US$38 billion in market capitalization that would make sense heading into next year.

For Encana, the deal signals a reduced reliance on natural gas and resources in Canada, where pipeline bottlenecks have weighed on prices. Chief Executive Officer Doug Suttles now envisions the Calgary-based company operating in a “ headquarterless model,” with major offices in the Houston area and Denver overseeing nearby operations.

Encana pledged significant investor benefits from the takeover, including a 25 per cent dividend increase and an expansion of buybacks. It also stressed that the deal adds to its key metric of cash flow per share. In response to a question about the market’s negative reaction, Suttles said he hadn’t even looked at the stock price. Shareholders will realize the benefits of the deal over time, he said during a conference call.

For its part, Newfield soared as much as 14 per cent in New York. The shares had been down 36 per cent this year through Wednesday.