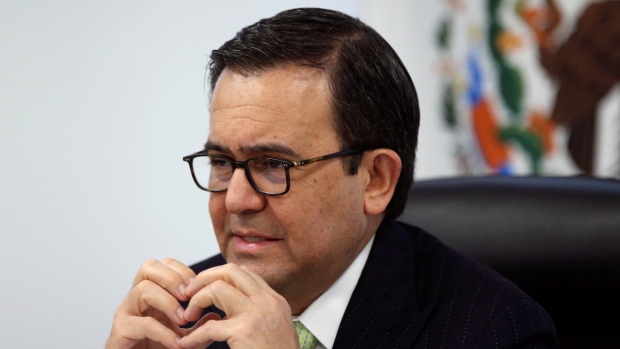 Under a best-case scenario, a newly negotiated North American Free Trade Agreement (NAFTA) would not be implemented before the end of next year or the start of 2019, Mexico's economy minister said on Thursday.

Among other issues, NAFTA talks would focus on how to provide more certainty in dispute resolutions, Economy Minister Ildefonso Guajardo said in a radio interview.

"According to the possible calendars of approval, the best of the scenarios that we could have ... would be the start of implementation almost at the end of 2018 or the start of 2019," Guajardo said.

Mexico has set out the goals of prioritizing free access for goods and services, greater labor market integration and a strengthening of energy security.

Last week, U.S. Agriculture Secretary Sonny Perdue said during a visit to Mexico that he hoped farm business with Mexico would not suffer due to President Donald Trump's drive to get a better deal for manufacturers.

Speaking in Japan on Thursday, Mexican Foreign Minister Luis Videgaray said the best way to calm Trump's worries about commerce with Mexico were through more trade, not less.

Videgaray said negotiators would need to be careful not to tweak trades rules on sourcing components too much or they could risk driving up the costs of goods like electronics.

"The important thing that we are not going to do is hurt the region's competitivity, and much less the region's consumers," Videgaray said according to a transcript.