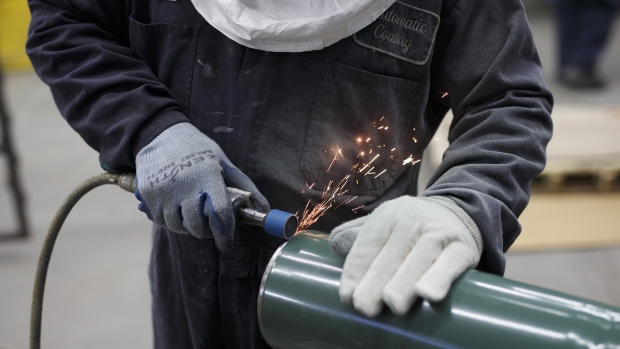 Sparks fly as a worker uses an instrument on a transducer tube at the Automatic Coating Ltd. facility in Toronto, Ontario. , Cole Burston/Bloomberg

An independent member of Canada's unelected Senate is advocating for an experimental basic income program at the provincial level, citing the complications to the employment insurance program after the end of the Canada Emergency Response Benefit.

Senator Yuen Pau Woo, who is a British Columbia representative in Parliament's upper house, said Thursday that he thinks COVID-19 has opened the door to rethink Canada's social safety net and its employment insurance system.

He spoke at a University of Victoria webinar that took place just before the Trudeau government released details about how it plans to wind down CERB, which provides $500 a week to qualified recipients whose income was affected by the pandemic.

While the senator did not go into detail on the new EI scheme, he said that a basic income program could be a solution to income inequality stemming from the COVID-19 pandemic and economic downturn.

“What appears clear to me is that EI will be somewhat less of an insurance scheme after these changes and will have to incorporate elements of a social security scheme, which will complicate our EI system even more. And I can tell you, it is already a very complicated system,” Woo said.

“How we fund it, is of course, a big question,” Woo said.

He said the non-partisan Parliamentary Budget Office has provided an estimate of offsets that could be applied to reduce the gross cost of basic income.

“Depending on how politicians choose to apply those offsets, the net cost of basic income would be much less than the headline number.”

Woo said the current economic slowdown was caused by a health crisis, not a financial crisis, as in the 2008 downturn.

Since the financial sector is in “relatively good shape,” Woo said, the government should advocate for structural changes in how the financial system works, such as changes in how sovereign debt is handled across the world, and changing the incentives for companies to act on climate change initiatives.

For example, Woo said, the government can require private companies to disclose climate change-related risks to their business models. Woo also referenced the “green new deal” policies being proposed in other countries.

Paul Beaudry, a deputy governor of the Bank of Canada who also spoke on the panel, said the central bank has been working with the financial sector to forecast different potential scenarios surrounding climate change and the transition to a green economy.

“The future is very uncertain right now, there are lots of different paths â€¦ Are they going to be resilient? Are they investing in the right places? Do they recognize the risks involved?” Beaudry said.

“We don't have a direct mandate to do environmental policy, that's not our role and we leave that to the elected officials. But we do have a responsibility to make sure the financial system is doing what needs to be done.”