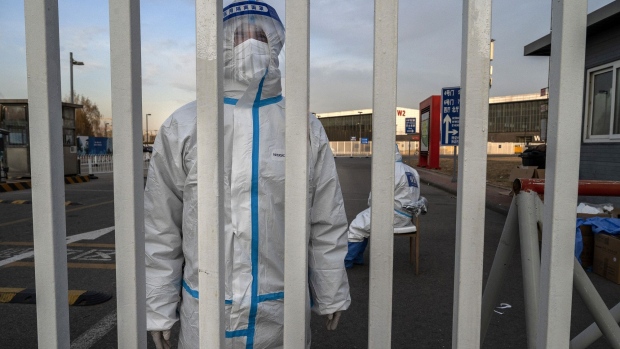 An epidemic control worker at a government quarantine facility in Beijing on Dec. 7. , Getty Images via Bloomberg

(Bloomberg) -- China faces a daunting task after abruptly giving up on Covid Zero, with infections set to surge and deaths predicted to top 2 million.

The world’s most populous nation is rapidly abandoning the mass testing, lockdowns and centralized quarantine that defined the stringent, three year-old policy. Yet, little time has been spent putting in place the mitigation measures needed to deal with the resulting explosion in cases, which could total 5.6 million a day at the peak, according to some estimates.

Unlike the whack-a-mole pattern of the outbreaks that took place in the US and Europe over months and years, China is likely to see a wave of infections engulf the country all at once in a population that until now has largely avoided exposure to the virus.

The result is China’s acceptance of Covid will be like nothing the world has seen in the pandemic.

Experts in science to economics paint a picture of impending chaos, with absenteeism paralyzing factories, serious disease overwhelming hospitals and outbreaks forcing residents to hunker down in their homes. Between 1.3 million and 2.1 million people may die, based on Hong Kong’s earlier experience with the omicron variant, according to an estimate by London-based research firm Airfinity.

“It will be all over the country almost at the same time, but first in urban areas and then in rural because of the crowding,” said Ali Mokdad, a professor at the Institute of Health Metrics and Evaluation and chief strategy officer for population health at the University of Washington. “It will be one month from now when we see very high numbers of cases, and mortality will come two weeks later. It will never come back down to where it is now.”

That projection would put the peak for infections close to the start of Lunar New Year, the most important holiday of the year in China. Before Covid, the weeklong break was the biggest mass migration event in the world as factory workers returned to their home villages for annual visits. Winter weather will also supercharge the virus’s spread as people spend more time inside.

The challenges will be formidable. Nursing homes will have to battle to protect their vulnerable, schools will close for extended periods as waves of infection hit and businesses won’t have enough workers as illness takes hold. China’s reliance on less potent home-grown vaccines means multiple shots are essential, while a dearth of circulating virus allowed people – most worrisomely the elderly – to skip immunization until now.

The outbreak may play out in the dark as China pulls back from testing. Already, the number of officially reported infections is diverging from reports on the ground in major cities, as negative results are no longer needed for basic activities and people avoid testing to stay off the government’s radar. There were 16,363 new local cases reported nationwide for Thursday, less than half the 38,808 reported at the recent peak.

China won’t be the first to transition from Covid Zero, a process navigated with varying degrees of success by Singapore, Hong Kong, Taiwan and Australia. And while pangs of fear were common worldwide as the virus first took hold in communities, the places that fought it most ferociously face an additional hurdle because living with the virus requires a mental shift that can be hard to accept.

“I don’t think anything looks good for China right now,” said Michael Osterholm, director of the Center for Infectious Disease Research and Policy at the University of Minnesota. “Its 1.4 billion people are at increased risk of contracting this virus for the first time, and these first infections surely pose the risk of serious disease, including hospitalizations and deaths.”

Investors have been more sanguine. Initial indications that China was exiting Covid Zero buoyed the nation’s financial markets on expectations that the release of pent-up demand would spur consumer spending and drive an economic recovery.

The Hang Seng China Enterprises Index of stocks surged 29% in Hong Kong in November, its best month since 2003. The gains came off a low base — the gauge ended October at the lowest level at an almost 17-year low. The yuan wiped out nearly a third of its yearly loss last month before surging past the key 7 per dollar level on Monday.

More volatility is expected as the impact of rising infections becomes clear.

“Though the market is still trading on the positive expectations, we are not entirely out of the woods, as we still have to get past the panic that might come with the first wave of infections,” said Ma Xuzhen, fund manager at Longquan Fund in Hangzhou.

Nevertheless, China has some advantages as it tries to fend off the worst-case scenario.

From its position in the back of the pack, China can use information gleaned from the experiences of other parts of the world, including Hong Kong which struggled with its own deadly wave earlier in the year.

The country also faces a strain of omicron that’s milder than previous forms.

“At this stage, the virus is totally different; being infected isn’t that serious,” said Xiaolin Wei, chair of global health policy at the University of Toronto’s School of Public Health. “Right now, the death rate is very low.”

An analysis from economists at Barclays suggest China’s fatality rate from an omicron wave would be 4 in 1,000 people, or 0.4%, among the unvaccinated. For the fully vaccinated, it could be two in 10,000, or 0.02%, they estimated.

The country’s top health authorities this week laid out how they will cope with rising infections. These include a triage plan to ensure residents who fall ill go to the most suitable medical institutions for their needs, rather than only renowned facilities that will be quickly overrun. Officials also are setting up isolated Covid wards for pregnant women, patients battling other diseases and high-risk people with health conditions.

There are signs community medical centers across the country are being mobilized. The National Health Commission called on these grassroot institutions to act as “gatekeepers,” providing a first point of care for patients with mild disease who need to self-medicate and recover at home. They also will be tasked with referrals to better equipped facilities for those with worsening symptoms.

Yet China faces criticism that such plans have been left too late, with resources instead focused on keeping Covid out — similar to Hong Kong, which found its health-care system overrun earlier in the year.

Preparing hospitals and ensuring adequate care for the elderly is easier said than done, said Huang Yanzhong, a senior fellow for global health at the New York-based Council on Foreign Relations.

“Training of ICU staff takes years and three years have been wasted,” he said. “Local governments didn’t have the incentive or capability to do advanced planning, or stock up on drugs, while they were busy enforcing Covid Zero. All the necessary planning has been put on the back burner.”

The depletion of fiscal coffers and rampant public discontent are driving the easing, he said, not the country’s readiness for a wave of infections.

Some health experts and economists say the government won’t try and rush its exit from Covid Zero, which means moving past the virus could take time.

Expectations that China could finish the job in two to three months are unrealistic, wrote Chang Shu, chief Asia economist for Bloomberg Economics. The rapid start could give way to a more measured approach, and the government could even backpedal to “flatten the curve” and reduce the loss of life, she said.

“The moment the death rate goes up so fast, there will be measures to contain it,” Mokdad said. “They aren’t going to let it rip, no.”

It still won’t be enough to contain the highly-transmissible variant, said Feigl-Ding, chief of the Covid Task Force at the World Health Network, who predicted half a dozen to a dozen cities will experience runaway transmission.

He pinning his hopes on Chinese cities imposing circuit-breakers if hospitals are overwhelmed and use of the new CanSino Biologics Inc. inhaled vaccine that’s being rolled out.

While living with the virus will ultimately benefit the economy, the initial impact is expected to be negative.

“Both supply and demand will bear the brunt of a case surge,” said Larry Hu, head of China economics at Macquarie Group Ltd. “Industrial workers might see widespread infections, while many residents would be reluctant to leave their homes. That will also weigh on consumption.”

Rising infections will curb economic growth at the end of 2022 and beginning of 2023, slowing from already subdued levels and likely falling below 3%, Hu said.

“The disruptions in the initial phase are probably inevitable,” Hu said. “The weeks leading to the Chinese New Year will likely be chaotic. In this period, local government policies will also likely to vary as the singular goal of getting cases back to zero is gone and they are faced with a slew of new tasks.”

The fact that China is releasing the mitigation measures from Covid Zero without having fully established the methods to protect them as the pathogen spreads — namely vaccines, health care facilities and easy-to-access therapeutics — make may some backpedaling essential.

“The road to the full reopening could still be gradual, painful and bumpy,” said Ting Lu, chief economist for Nomura International. “China does not appear to be well prepared for a massive wave of Covid infections, and it may have to pay for its procrastination on embracing a ‘living with Covid’ approach.”

--With assistance from Fran Wang, Enda Curran and Nasreen Seria.

(Updates to add doubts over infection numbers in ninth paragraph)