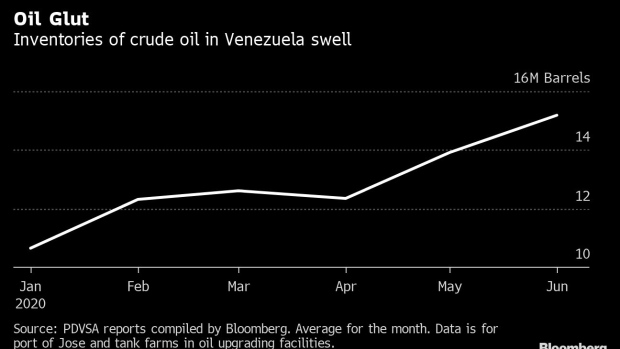 A motorcyclist pays for gas with a U.S. five dollar bill at a Petroleos de Venezuela SA (PDVSA) gas station in Caracas, Venezuela, on Monday, June 1, 2020. Venezuela’s President Nicolas Maduro said fuel prices would increase starting in June, a historic policy shift after decades of subsidies that have allowed Venezuelans to essentially fill their tanks for free. , Bloomberg

(Bloomberg) -- Oil revenue, the financial lifeline of Venezuela, is quickly drying up, adding to the growing instability of Nicolas Maduro’s embattled regime.

Crude exports that once accounted for 95% of foreign currency inflow to the country tumbled by almost half this month, after hitting a 73-year low in May. The plunge comes as U.S. sanctions continue to target Venezuela, home of the world’s largest oil reserves.

Maduro’s regime is already plagued by a humanitarian crisis aggravated by the global pandemic that’s sapping domestic demand for fuels. There’s only one more oil tanker expected to load for the remaining 12 days of the month, documents show. Venezuela used to load two vessels per day two years ago before financial sanctions were imposed.

Oil storage tanks in the country are nearly full, forcing operators to shut in production to levels not seen since the end of the Second World War. It’s next to impossible to sell crude to foreign buyers with most oil vessels booked to export crude forced to cancel due to the Trump administration’s sanctions.

“Without oil money life gets a lot harder for Maduro,” said Diego Moya-Ocampos, a political-risk consultant at IHS Markit in London. “He will have to rely more on gold mining and illegal activities such as drug trafficking to pay for his security apparatus.”

Shipments of oil, used to barter for fuels and food, slumped to 167,222 barrels a day this month through Thursday, down 45% compared to the same period in May, data from loading programs and ship-tracking compiled by Bloomberg show.

After the U.S. levied sanctions on Mexican firm Libre Abordo SA de CV and its affiliate Schlager Business Group, Venezuela began relying on shipments to its ally Cuba and to Italian refiner Eni SpA and Repsol SA from Spain. Both Eni and Repsol have said in the past they are collecting oil as payment to settle old debts.

“Repsol receives cargoes as payment for outstanding debts,” said spokesperson Kristian Rix in an email. “Repsol is fully compliant with international laws and regulations and will, of course, remain so.”

Eni has been recovering receivables from PDVSA via the supply of crude oil in full compliance with U.S. sanctions, according to a company statement.

Inventories have ballooned as exports tumble. Stockpiles are averaging 15.2 million barrels in June, up 43% compared with January. Tanks have enough spare room to store no more than 800,000 barrels, documents show. As a result, oil upgrading facilities run by state oil company Petroleos de Venezuela SA in partnership with Chevron Corp. and China National Petroleum Corp. had to stop activities in June as they ran out of space to store crude.