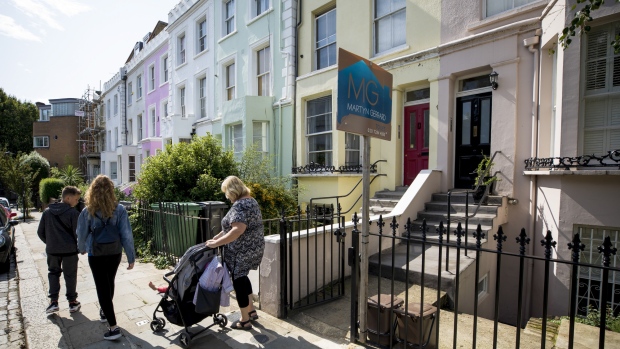 A group of pedestrians pass an estate agent's property for sale board on display outside residential properties in the Camden district of London, U.K. on Monday, Aug. 19, 2016. Asking prices for London homes registered their first annual increase since 2017 this month, as the Brexit-battered market started to show signs of life. , Bloomberg

(Bloomberg) -- Brexit hung over the U.K. property market in September, sapping both sellers and buyers alike.

An index of homes put up for sale fell to the lowest since June 2016, the month of the referendum, while measures of newly agreed sales and buyer inquires also slid, according to a report by the Royal Institution of Chartered Surveyors published Thursday. RICS’s headline index of prices remained negative.

“There are good reasons for thinking the latest dip in both buyer enquiries and vendor instructions is a response to the endless wrangling about Brexit, as the Oct. 31 deadline approaches,” said Chief Economist Simon Rubinsohn.

The overall picture was depressed by London and the southeast, which have borne the brunt of the increased uncertainty, RICS said. While most respondents expect prices to continue to fall over the next three months, they were more optimistic on a 12-month basis.

Here are comments from some of the real estate agents surveyed:

Kenneth Bird, Renton & Parr, in Yorkshire and the Humber

“Many potential vendors have adopted a wait and see attitude with a consequence of a shortage of stock on the market due to Brexit.”

“Potential home owners and current owners are delaying a commitment unlessit is unavoidable because of the uncertain outcome of Brexit.”

“The usual increase in sales and instructions following the holiday period has not happened. I believe ‘Brexit’ is now biting and until resolved matters may not improve.”

“The market is in the curse of Brexit and as soon at it sorts itself out the market will be like a cork out of a bottle, with people having put things on hold until a decision is made.”

“Brexit once again dominates the conversation, although investors are now as (or more) concerned about the effects a Labour administration will have on the property market.”

To contact the editors responsible for this story: Paul Gordon at pgordon6@bloomberg.net, Andrew Atkinson, Brian Swint