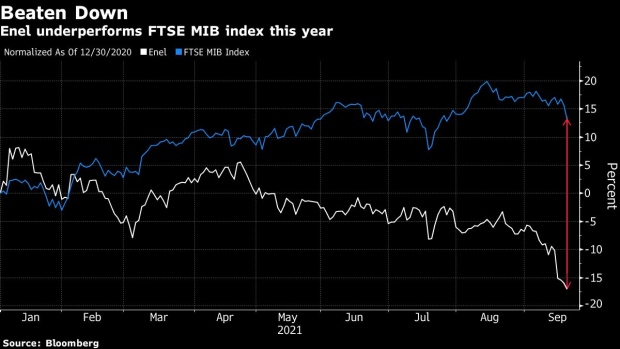 (Bloomberg) -- Enel SpA shares haven’t had a great run over the past week -- or this year for that matter.

The recent drop, with the stock down 5.6% last week and extending declines on Monday amid a global market slide, come in the wake of surging gas and electricity prices and a decision by Spain’s government to try and blunt the impact of higher energy bills for citizens, adding uncertainty for power companies. Enel owns about 70% of Madrid-based Endesa SA.

The rough week only adds to Enel’s woes in 2021, as shares have suffered along with the overall utilities sector, the worst-performing subgroup on the European equity gauge this year.

Enel is down 17% in 2021, making it in turn the worst performer on Italy’s benchmark FTSE MIB index, which is up 13%. A negative full-year share performance would be an anomaly for the utility, which carries the biggest weighting on the Milan benchmark. Enel shares rose on a full-year basis every one of the past eight years except 2018, when they closed down less than 2%.

An Enel spokesperson declined to comment for this story.

“The Spanish measures have opened up a Pandora’s box, unleashing uncertainty and concern among investors that other governments may intervene to protect consumers from higher energy prices, which is becoming a hot political issue,” Mediobanca SpA analyst Javier Suarez said in a phone interview. “We’re seeing an overreaction driven by sentiment and this uncertainty is likely to last in coming weeks.”

Other European countries are also mulling moves to reduce the burden for households and companies. France is considering easing the cost of rising energy bills and is already handing out vouchers worth about 150 euros ($176) per year to nearly 5.5 million households. Greece also announced a subsidy for all households and Italy is likely to intervene to reduce the impact of energy price spikes in coming months.