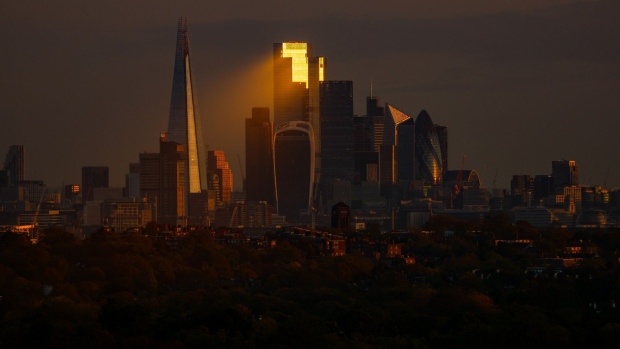 Skyscrapers, including the Shard, Natwest Tower, 20 Fenchurch Street, also known as The Walkie Talkie, 22 Bishopsgate, The Leadenhall Building, also known as The Cheesegrater, The Scalpel, and 30 St. Mary's Axe, also known as the Gherkin, in London, U.K., on Monday, Oct. 26, 2020. London's pandemic-struck office market is crawling back to life. Photographer: Simon Dawson/Bloomberg , Bloomberg

Copeland was most recently head of energy for Europe, the Middle East and Africa at RBC’s investment banking unit. He will start at the boutique advisory firm at the end of the first quarter, Kirk Lovegrove said in a statement on its website dated Monday. He joins as a principal and will work with the founding partners to help bolster the business, according to the statement.

Kirk Lovegrove was set up in 2018 by senior bankers Martin Lovegrove and Niels Kirk as an independent upstream oil and gas advisory firm. Demand for specialist advice has increased in recent years as the industry goes through seismic changes, with major producers selling legacy assets and investing in new areas like renewable energy.

Copeland, who has nearly 30 years of investment banking experience, advised on the reverse takeover of independent exploration firm Premier Oil Plc by Chrysaor Holdings Ltd., one of last year’s biggest European energy deals. He has previously worked at firms including Evercore Inc. and Deutsche Bank AG, according to his LinkedIn profile.