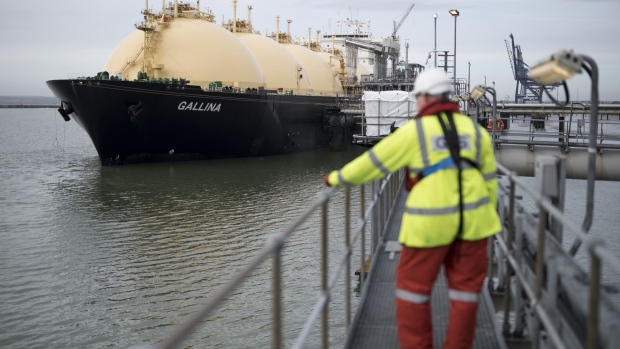 An employee looks towards the Gallina liquefied natural gas (LNG) tanker after docking at the National Grid Plc's Grain LNG plant on the Isle of Grain in Rochester, U.K., on Saturday, March 4, 2017. The shipment to England on the Gallina was priced using the U.K.'s National Balancing Point, where front-month gas cost about $7 a million British thermal units on Feb. 7. Photographer: Jason Alden/Bloomberg , Bloomberg

(Bloomberg) -- European Union energy ministers are set for another spat over how to cushion consumers and companies from soaring power and natural gas prices, with political and legal constraints leaving little room for immediate action.

At an emergency meeting in Luxembourg on Tuesday, the ministers will discuss how the EU could complement measures already taken by member states and what could be done in the medium term to prevent future price shocks.

Several countries are calling for the EU to come up with new intervention tools, but a group of nations including Austria, Denmark, Finland and the Netherlands are poised to argue that the hike is temporary and should not lead to hasty changes to the bloc’s energy laws and its ambitious climate reforms, according to a new joint statement.

“As the price spikes have global drivers, we should be very careful before interfering in the design of internal energy markets,” the countries, which also include Germany, Estonia, Ireland, Luxembourg and Latvia, said in the document shared with other governments before the ministerial meeting.

The unprecedented energy crisis has become one of the hottest issues as the 27-nation bloc heads into the winter season, with households facing double-digit increases in electricity bills and some industrial giants curtailing production.

Tuesday’s gathering follows a discussion last week about the crisis at a summit with EU leaders, who brushed off calls by some countries for quick fixes to the bloc’s laws and the Green Deal strategy to make the economy sustainable. Most countries have already cut taxes or approved subsidies to help households and companies, and there are few remaining tools that are technically possible and politically palatable.

“I don’t see a lot of margin for maneuver for countries to come up with something concrete and new,” said Maximo Miccinilli, head of energy and climate at FleishmanHillard EU. “Is this council going to be a game changer for these negotiations? My answer is no -- it will be about preparing for the mid-term.”

With varying energy sources and industrial strengths, countries in the bloc differ on how to blunt the impact of the crisis. Nations including Spain and Greece have called for creating a common platform to purchase natural gas. France is urging a review of the power market design and Poland wants immediate changes to the EU carbon market to curb speculation.

The challenge for national governments and the regulators in Brussels is to come up with a solution that will keep the lights and heat on this winter while preserving support for the bloc’s ambitious climate agenda. The crisis struck at a time when member states are considering a package known as Fit for 55 to implement a stricter 2030 emissions-reduction target.

“For the medium term, a central part of the solution lies with cost-effective energy efficiency measures and the accelerated deployment of renewable energy sources,” the nine countries said in the document. “We agree with the Commission that it is of utmost importance to swiftly proceed with the treatment of the Fit for 55 package to achieve climate neutrality by 2050.”