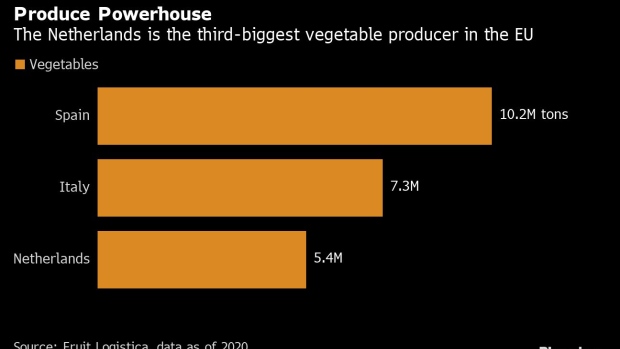 (Bloomberg) -- The Netherlands, the world’s top flower exporter and one of Europe’s largest producers of fresh fruit and vegetables, is warning of a steep output plunge as crippling energy costs stifle the country’s extensive network of greenhouses.

Royal FloraHolland, the world’s largest flower market in Alsmeer, estimates Dutch flower production will drop by up to 40% between Christmas and next spring due to the rising costs of maintaining greenhouses, spokesperson Michiel van Schie told Bloomberg.

The expenses of heating and lighting the glass structures that sprawl over an area equivalent to 17,000 soccer fields now make up as much as 70% of the cost of most greenhouse crops, more than double that for last year, according to industry group Glastuinbouw Nederland.

The worsening energy crisis means growers are opting to leave greenhouses partly or even entirely empty, the group said.

Soaring costs are also making the sale of energy contracts to other users more profitable than growing plants as agreements signed later in the year are expected to be even pricier. “I was told of one farmer who sold his energy contract, which he’d fixed for several years, for 35 million euros,” Schie said.

The drop in production means growers in sunnier climates such as Spain and Morocco are likely to grab a share of lost output from the Netherlands, a lucrative market where exports of greenhouse produce amounted to 9.2 billion euros ($9.5 billion) in 2020. Nevertheless, any shortages will further stoke inflation across Europe, where food prices have already soared 11% from a year earlier in a cost-of-living crisis that shows little sign of easing.

“There might be a shift of production of produce during the next month to cope with the consequences of high energy costs,” said Philippe Binard, a spokesman for the European Fresh Produce Association, the Brussels-based trade group for the region’s biggest growers. “This will be reflected later in the chain and up to the consumer.”

In Spain -- Europe’s top fruit and vegetable supplier -- farmers typically don’t require heating and lighting over the winter and can be more adaptable to what they grow. The country’s growing season also runs roughly from October to May, a time when energy prices will be at their highest for most Dutch greenhouse operators.

“Spanish producers are more flexible than growers in northern Europe as they produce in basic plastic greenhouses,” said Cindy van Rijswick, a fresh produce specialist at Cooperatieve Rabobank UA. “They can expand the acreage or shift between crops so they can decide to grow more tomatoes and cucumbers for the export market instead of other crops for the local market.”

Dutch growers are trying to adapt to soaring energy costs, with some looking to end the growing season early or stop using artificial light. But these measures will cut yields and further boost prices for the consumer.

“We are saving what we can without any harm to the crop, because quality is very important,” he said. “But the energy prices are extraordinarily higher.”