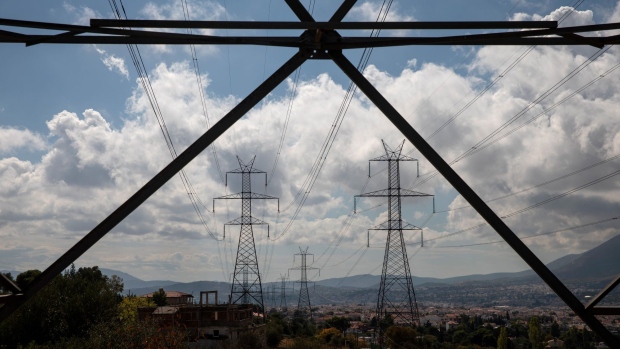 Electricity transmission pylons in Gerakas suburb, northeast of Athens, Greece, on Tuesday, Oct. 12, 2021. European Union leaders are poised to authorize next week emergency measures by member states to blunt the impact of the unprecedented energy crisis on the most vulnerable consumers and companies. , Bloomberg

(Bloomberg) -- Soaring energy prices are exacerbating divisions in the European Union as national leaders brace for heated talks about how to protect the most vulnerable and avoid a backlash against the bloc’s ambitious climate change plan.

The unprecedented spike in power and gas prices is the first topic for EU leaders in their two-day summit starting Thursday in Brussels, but the bloc’s ability to act is extremely limited. Most countries have already cut taxes or approved subsidies to help households and companies, and there are few remaining tools that are technically possible and politically palatable.

EU leaders are set to give the green light to immediate rescue plans by national governments and will pledge to “swiftly consider medium- and long-term measures that would ensure energy at a price that is affordable for households and companies,” according to the most recent version of the summit communique seen by Bloomberg News.

But that won’t do anything to alleviate the current crisis and, behind the scenes, leaders will spar over whether nuclear energy and gas should be treated as green, the best way to reduce emissions and whether to change the way the electricity market is regulated.

So, while the EU wants to lead the global fight against climate change and set an example for other major emitters such as the U.S. and China, this summit will underline how far apart EU nations are in agreeing on their own energy transition.

The current crisis is making things worse in the short term, pitting countries in the south and the east of Europe against the wealthier -- and often more climate-ambitious -- members in the north, who argue the hike is temporary and has nothing to do with European green policies. The 27-nation EU toughened its 2030 greenhouse gas-reduction goal to at least 55% from 1990 levels and aims for net zero emissions by the middle of this century.

With electricity bills at risk of double-digit increases, the EU’s plans to ban new fossil-fuel cars by 2035 and put a carbon price on dirty home heating are an even tougher sell. The European Commission’s proposal to extend emissions trading to heating and transport fuels has become the most criticized element of the July package to enact the new climate target.

The Greek government estimated that the crisis will cost consumers an additional 100 billion euros ($117 billion) in the 2021-2022 winter season and together with France, Spain, Romania and the Czech Republic called for new measures including joint purchases of natural gas and an overhaul of power markets.

Three days before the summit, Poland called for an investigation into abusive practices by Gazprom PJSC, arguing that the Russian gas exporter’s behavior could be an attempt to pressure the EU to enable the operation of the Nord Stream 2 pipeline. The new gas link between Russia and Germany, which has long divided member states, is set to be one of many thorny issues at the summit.

“Skyrocketing natural gas and electricity prices, declining competitiveness of European industries, failing gas trading companies, suspension of production in some European factories are a wake-up call for the EU to undertake tangible actions to avoid a repetition of the current situation in the future,” Polish Climate Minister Michal Kurtyka said in a letter seen by Bloomberg News to the European Commission’s competition chief, Margrethe Vestager.

The energy crisis will also underscore differences over the role of nuclear policy in the European transition to a clean economy. While the EU leaves the right to decide on energy sources in the hands of individual member states, it can influence their choices by regulations on emissions and green investment.

A group of countries led by France will be pushing for assurances by the leaders that nuclear energy has a place in the future, according to three EU diplomats with knowledge of the matter. Another coalition of nations, headed by Poland, will seek confirmation that natural gas has a bridge role in the energy transition.

With energy being one of the most politically sensitive issues, EU leaders hope Thursday’s summit will at least be a signal to the voters that governments are listening. The bloc’s ministers are scheduled to follow up on Oct. 26, when they gather at an emergency meeting in Luxembourg.