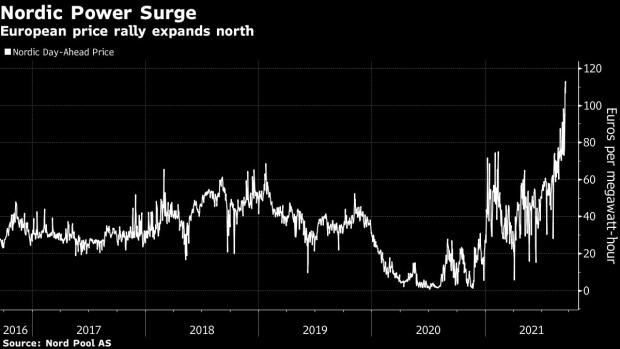 Swedish inflation could reach the highest level since the financial crisis as the natural gas crunch sends ripples through the global economy.

European benchmark prices have more than tripled this year. While the fuel isn’t a widely used commodity in the biggest Nordic country, it has sent other energy prices from electricity to carbon emission permits soaring, raising costs for everything from chemicals to auto parts.

“Electricity prices face a perfect storm both given the weather and structural factors,” Swedbank AB said on Friday. The bank said Swedish inflation could sail above 3% in the coming months, which would be the highest level since 2008. It has averaged 1.6% over the past five years, according to data compiled by Bloomberg.

A faster-than-expected jump in Swedish inflation last month to 2.4% added fuel to speculation that the Riksbank may speed up its plans to exit pandemic stimulus. While the Nordic nation’s export-driven economy has recovered its pre-pandemic size faster than most industrialized nations, the Riksbank has been among the most dovish in the G-10 sphere of major currencies.

Electricity “prices keep going up and nothing will be able to stop that,” analysts at Bixia AB, a Swedish utility, said in a report.

Governor Stefan Ingves has shrugged off a surge in some commodity prices and cost pressures from supply bottlenecks as temporary, refraining from signaling any intention to raise borrowing costs from zero anytime within the next three years. The world’s oldest central bank is also mindful of lessons from the previous tightening cycle after the financial crisis that attracted criticism from Nobel Prize winner Paul Krugman.