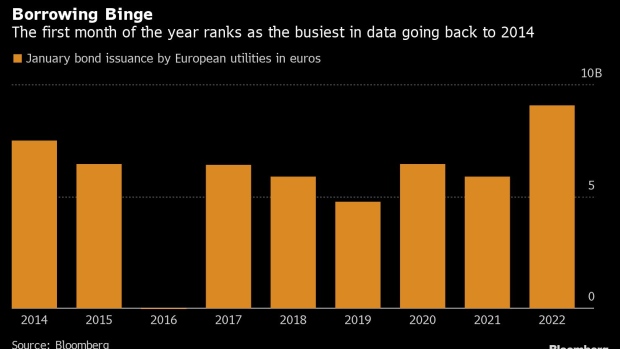 (Bloomberg) -- Squeezed by soaring yields and potential government price caps, European utilities are making a dash to the bond market.

Energy companies from Italy’s Enel SpA and Germany’s E.On SE have raised 9.1 billion euros ($10.3 billion) in January, the highest tally in data going back to 2014.

Utilities account for a third of all investment-grade corporate bond offerings in Europe so far this year. Issuance is up 53% compared with January 2021.

Companies in the industry are tapping bond markets before borrowing costs rise even further and in case finances are hit by government price caps, bankers said. They have tended to issue shorter-dated debt, with investors increasingly wary of longer maturities given the recent volatility in the rates market.

Borrowing costs for European utilities are already at their highest level in over 18 months, with average yields for an index that includes gas, electricity and water providers rising to 1.177% last week. Some have been forced to extend their lines of credit to pay margin calls -- the collateral that exchanges require to guarantee trades -- which have increased as price volatility soared.

Some companies in the industry are in a fragile state. French utility Electricite de France SA was ordered this month by the French government to sell more power at a steep discount, opening up a hole of about 8 billion euros in its finances and prompting a ratings cut. Norwegian utility Fredrikstad Energi AS has warned about the risk of covenant breaches on three of its bonds.

While yields globally have been moving up, there’s also evidence that investors are wary of utilities in particular. For example, the yield gap between the utilities index and a broader euro bond index last week hit its widest since November.

BlueBay Asset Management is getting out of the bonds of companies that can’t pass on their increased energy costs.

“Revenues are going up for utilities, but the possibility of government action and subsidies is definitely one we have to be wary of,” said Justin Jewell, a London-based portfolio manager at BlueBay. “This year is going to be about avoiding the ones that are going to have a problem.”