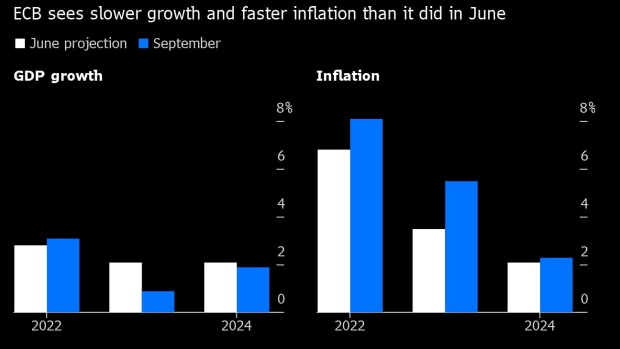 (Bloomberg) -- The economic damage from the shutdown of Russian gas flows is piling up fast in Europe and risks eventually eclipsing the impact of the global financial crisis.

With a continent-wide recession now seemingly inevitable, a harsh winter is coming for chemical producers, steel plants and car manufacturers starved of essential raw materials who’ve joined households in sounding the alarm over rocketing energy bills. The suspected sabotage this of Germany’s main pipeline for gas from Russia underlined that Europe will have to survive without any significant Russian flows.

Building on a model of the European energy market and economy, the Bloomberg Economics base case is now a 1% drop in gross domestic product, with the downturn starting in the fourth quarter. If the coming months turn especially icy and the 27 members of the European Union fail to efficiently share scarce fuel supplies, the contraction could be as much as 5%.

That’s about as deep as the recession of 2009. And even if that fate is avoided, the euro-area economy is still on track to spend 2023 suffering its third biggest contraction since World War II — with Germany among those suffering the most.

“Europe is very clearly heading into what could be a fairly deep recession,” said Maurice Obstfeld, a former chief economist at the IMF who’s now a senior fellow at the Peterson Institute for International Economics in Washington.

The bleak outlook already means that, seven months on from the outbreak of war in Ukraine, governments are shoveling hundreds of billions of euros to families at the same time as they bail out companies and talk of curbs on energy-usage. And those rescue efforts may still fall short.

Adding to the pressure on companies and consumers, the European Central Bank is also squeezing the economy as its new laser-like focus on surging inflation drives the fastest hiking of interest rates in its history. ECB President Christine Lagarde said Monday that she expects policy makers to lift borrowing costs at the next several meetings. Traders are already pricing in a jumbo 75 basis-point hike at the next monetary policy meeting on Oct. 27.

“The outlook is darkening,” Lagarde told EU lawmakers in Brussels. “We expect activity to slow substantially in the coming quarters.”

Some energy-industry watchers warn of a lasting crisis that potentially proves bigger than the oil-supply crunches of the 1970s. Indeed, the final impact of the shortages could be even worse than economic models can capture, Jamie Rush, Bloomberg’s chief European economist, said.

In an energy crunch, the industrial supply chain can break down in dramatic and unpredictable ways. Individual businesses have a breaking point above which high energy costs simply mean they stop operating. Whole sectors can face shortages of energy-intensive inputs such as fertilizer or steel. In the power system, once a blackout starts, it can quickly get out of control, cascading across the grid.

“Our analysis is a sensible starting point for thinking about the channels through which the European energy markets affects the economy,” Rush said. “But it cannot tell us the impact of system failures.”

As a witness to the pain, consider the experience of Evonik Industries AG, one of the world’s largest specialty chemical manufacturers, based in western Germany’s industrial Ruhr valley. In a statement to Bloomberg, the company warned of the potential long-term harm from persistently high costs.

“The basic condition for the prosperity of the German economy, and in particular of the industry, is the permanent availability of energy, also from fossil sources, at reasonable prices,” the company said.

Data released just last week showed private-sector activity in the euro zone contracted for a third month in September, with an index of purchasing managers compiled by S&P Global slumping to its lowest level since 2013. Meanwhile the crisis has also driven consumer confidence to a record low.

His invasion of Ukraine in February plunged the economy into further chaos amid ballooning inflation, a deepening cost-of-living crisis, and cuts to industrial production. By early September, the limited gas that had still been running through the Nord Stream 1 pipeline from Russia to western Europe had stopped indefinitely.

The pipeline suffered a sharp drop in pressure this week and a German security official said the evidence points to deliberate sabotage rather than a technical issue. Gas leaks from three pipelines appeared almost simultaneously in the Baltic Sea, prompting Denmark to say it was stepping up security around its own energy assets.

To put that in context, a year earlier such gas supplies, including LNG, covered around 40% of Europe’s total demand. So while gas and power prices have slipped from August records, they are still more than six times higher than normal in some areas. At that price, thousands of companies simply aren’t viable in the long term without government support.

For Bloomberg Economics, the baseline scenario — estimated using a suite of models that combine energy supply, prices, and growth — is now one where Russian flows hold at around 10% of those seen in 2021. That’s already pretty dire, according to economists Maeva Cousin and Rush.

“Even after government support, the real income squeeze is big enough to trigger a recession,” they said.

Their “bad luck” scenario features even less gas, a winter as cold as 2010, and low production from renewable energy.

“If consumer behavior proves sticky and unity between EU countries begins to break down, gas prices could spike above 400 euros, inflation could approach 8% next year and the economy might contract by almost 5% this winter,” they said.

Politicians already opened the fiscal floodgates to avert an economic catastrophe during the pandemic and kept up support as the energy crisis took hold. Now they have to choose whether to further strain public finances with more aid or answer to voters for allowing the crisis to spiral out of control.

“Governments are under enormous pressure to intervene,” said Dario Perkins, an economist at TS Lombard in London. “Price caps, liquidity support and big fiscal transfers seem inevitable. The authorities must support households and businesses or suffer a recession similar to the one they dodged during the pandemic.”

Totting up all the red ink, the Bruegel think-tank estimates that as of the middle of September, EU governments had earmarked 314 billion euros to cushion the crunch’s impact on consumers and businesses.

That will take its toll on the region’s public finances, and Simone Tagliapietra, a researcher at Bruegel, described the bill as “clearly not sustainable from a fiscal perspective.”

The lingering fear of the energy industry is that the pain of coming months may only be the start. Christyan Malek, JPMorgan Chase & Co’s global head of energy strategy, told Bloomberg TV this month that once Beijing eases Covid restrictions Chinese demand for LNG will increase, leading to more competition and more price pressures for Europe.

“This is not just a three-month problem,” said Anouk Honore, senior research fellow at Oxford Institute for Energy Studies. “This is potentially a two-year problem.”

(Updates with details of Nord Stream incident in second and 17th paragraphs. An earlier version of this story corrected a reference to Volkswagen disruption.)