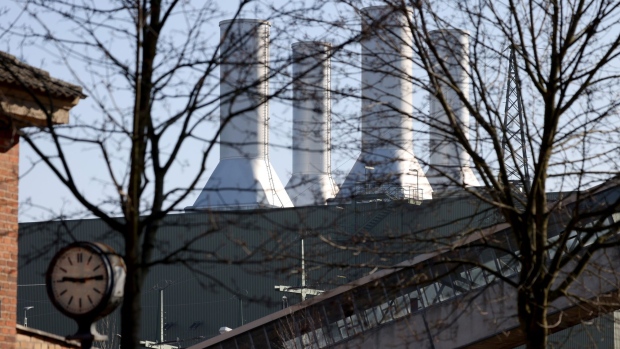 The Kirchmoeser natural gas power plant, operated by Uniper SE, beyond TKTKTK buildings in Brandenburg, Germany, on Thursday, March 24, 2022. Germany's ruling coalition reached a deal on a second package of measures to ease the burden on consumers and businesses from soaring energy costs. , Bloomberg

The Dusseldorf-based utility lost 829 million euros ($871 million) at its operations in the first quarter, reversing adjusted earnings before interest and taxes of 731 million a year earlier. The large majority of the loss will be compensated later in the year, when fuel is delivered to buyers at a higher prices.

European natural gas futures have dropped about 20% since the start of March as the end of the winter heating period has crimped consumption and record-high liquefied natural gas shipments are arriving to help the continent to diversify away of Russian fuel. Uniper had already issued a profit warning for the quarter, but kept its outlook for the year unchanged.

The company also posted an overall net-loss of 3.1 billion euros as it was forced to write down its investment in Nord Stream 2, the controversial pipeline linking Russia directly to Germany, and its Russian subsidiary Unipro. Uniper is one of Europe’s biggest buyers of Russian gas.

Uniper reduced gas withdrawals from storage by about 13 terawatt-hours in March, the company said last month. The strategy will allow it to sell the fuel at higher prices, with some 750 million euros of loss expected to revert in the remainder of the year. The strategy will also bolster security of supply at a time the war in Ukraine threatens supplies.

Russia has already cut supplies to Poland and Bulgaria as the nations refused new payment terms that would allow Gazprom PJSC to get paid in rubles. That could be a threat to Uniper, which relies con Russia for more than half of its gas needs.

The company -- which was forced to borrow billions to cope with wild energy-prices swings -- confirmed the outlook for adjusted earnings before interest and taxes in the range of 1 billion euros and 1.3 billion euros for the full fiscal year 2022.

“Because this is an earnings shift and not a shortfall and based on our assumptions regarding our further business performance, we can affirm our earnings forecast for the current financial year,” Tuomela said.