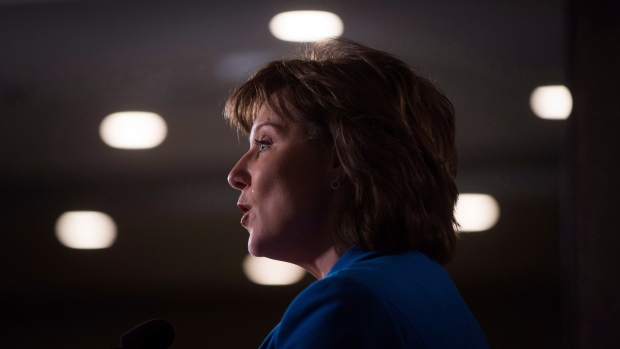 VANCOUVER - British Columbia's minority Green Party on Monday struck a deal with the left-leaning New Democrats to govern Canada's western-most province, a move that casts doubt on the future of key energy projects from firms such as Kinder Morgan Inc.

Announcement of the partnership ends a stalemate that emerged last week when the final tally of votes from a May 9 election stripped Liberal premier Christy Clark of her majority. She will now leave office.

The two parties said they will disclose details of their plans on Tuesday.

Green leader Andrew Weaver did not reveal what the pact says about Kinder Morgan's plans to twin its Trans Mountain crude oil pipeline from Alberta to the Pacific coast. Both parties oppose the $7.4 billion project.

"This issue of Kinder Morgan is one that was critical to us and I think you'll see that reflected in tomorrow's announcement," Weaver told a news conference with NDP leader John Horgan.

Kinder Morgan's Canadian unit is expected to debut on Tuesday on the Toronto Stock Exchange in an initial public offering to part-finance Trans Mountain. The company did not immediately respond to a request for comment, although it acknowledged last week the political climate was "not ideal."

Any move by the new government to block Kinder Morgan will be a blow to federal Liberal Prime Minister Justin Trudeau, whose government approved the project last November. Clark's Liberals are unrelated to Trudeau's party.

Trudeau's spokeswoman Andree-Lyne Halle said the federal government would continue to "work constructively with provincial and territorial governments on the issues that matter to Canadians."

Trudeau says the Alberta energy industry needs the pipeline to boost exports to Asia and reduce reliance on the U.S. market. Opponents say the risks of a spill are too large.

"We will continue to do what we have done all the way, which is standing up for Alberta's best interests. That includes Kinder Morgan and making sure we have access to tidewater for our products," said Alberta Deputy Premier Sarah Hoffman.

Hoffman said Alberta would intervene in lawsuits against the project.

While there is some dispute over whether British Columbia can actually formally block a pipeline project, it can raise multiple hurdles like denying local construction permits that could effectively make it impossible to build.

Horgan has also expressed reservations about a $27 billion liquefied natural gas terminal that Malaysia's Petronas wants to build in northern British Columbia. Petronas was not immediately available for comment.

The political agreement reached between the Greens and New Democrats still needs to be voted on by the NDP caucus on Tuesday. If they agree to create a minority government, it would be the province's first in 65 years.

Richard Johnston, a professor of political science at the University of British Columbia, said the announcement was "a revolutionary moment in B.C.'s politics. This would be the first minority that lasts more than a year."

The Liberals have ruled the province for 16 years.

Clark issued a statement saying the government had "a responsibility to carefully consider our next steps" and would have more to say on Tuesday.

Her obvious options include resigning, or hanging onto power until she presents her formal agenda to the new legislature. The Greens and NDP would then immediately vote to bring her down.