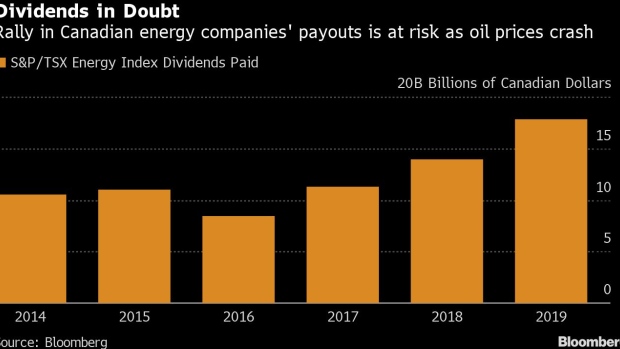 The Syncrude Canada Ltd. base plant stands in the Athabasca Oil Sands near Fort McMurray, Alberta, Canada, on Wednesday, June 19, 2014. Heavy crude from the oil sands has traded at an average of $18.70 per barrel below the U.S. benchmark over the last five years due to a transportation bottleneck in North America. The discount costs Canadas economy as much as C$50 million per day, according to the Canadian Chamber of Commerce. Photographer: Bloomberg/Bloomberg , Photographer: Bloomberg/Bloomberg

(Bloomberg) -- Investors in Canadian energy stocks have enjoyed a surge in cash returns from buybacks and dividends in recent years. That party may be about to end.

Canada’s oil-sands producers have less flexibility to cut production in response to low crude prices because their reservoirs require constant injections of steam to keep flowing. It limits how much they can reduce capital spending, and many companies weren’t planning much in the way of growth projects in 2020 anyway.

That leaves curtailing buybacks and dividends as most immediate ways the country’s energy companies can conserve cash, following the example set by Houston-based Occidental Petroleum Corp., which cut its dividend 86% on Tuesday.

“There will have to be some cuts,” Martin Pelletier, managing director and portfolio manager at TriVest Wealth Counsel in Calgary, said in an interview. “What else can they do? They only have so much cash flow to work with and that’s going to get hit pretty hard with oil prices falling 40% this year.”

That would be a turnabout from recent years. Companies in the S&P/TSX Energy Index paid out a combined C$17.8 billion ($13 billion) in dividends last year, more than double the C$8.4 billion they paid out in 2016, the year global oil prices bottomed out.

Calgary-based Bonterra Energy Corp. suspended its dividend on Tuesday. ARC Resources Ltd. may have to cut its dividend by half, according to analysts at Tudor Pickering. The stock has a yield of 13.5%.

Last year’s 28% jump in energy dividends was even higher than the 24% increase in 2018, according to data compiled by Bloomberg.

The story has been much the same for share buybacks. After slashing repurchases to a mere C$40 million in 2016, companies ramped up buybacks to C$6.8 billion in 2018. They bought back another C$5.4 billion last year.

While Canadian energy companies’ payouts may fade, this year’s price crash may make them more attractive to investors seeking stocks that are, by some measures, inexpensive. The Canadian energy index is down 30% this year, and 21 of its 30 members are trading at less than book value, according to data compiled by Bloomberg.

TriVest’s Pelletier said he has been buying Canadian energy stocks this week after being underweight in the sector so far this year.

“There are some bargains out there,” Pelletier said. “When oil gets down to these levels, it doesn’t stay here for very long. If you look at 2008 and 2014, it wasn’t there very long at all. So that’s a major signal for me.”

(Updated to add news on Bonterra and Arc Resources)

To contact the reporter on this story: Kevin Orland in Calgary at korland@bloomberg.net

To contact the editors responsible for this story: Derek Decloet at ddecloet@bloomberg.net;Simon Casey at scasey4@bloomberg.net