Could energy stocks be a bright spot in 2020?

Energy equity carnage was alive and well throughout 2019, and the start of 2020 could bring more of the same for the beaten-up sector, though some analysts are turning positive.

“We are in an environment where the playbook to kick off the year reads like a rinse and repeat from past years,” CIBC Capital Markets’ energy team said in a note to clients. The team added that “it’s also one that doesn’t require anyone to be a hero or to take on more heartburn than is necessary.”

The energy sector is the worst-performing group this year, up a mere three per cent versus the S&P 500 Index’s rise of over 25 per cent. Canada’s energy gauge has advanced about 12 per cent against Toronto’s stock market gain of about 18 per cent. Crude oil has outpaced both indices during the same period.

A slightly positive tilt is creeping into analyst forecasts, with JPMorgan recently turning “more sanguine” on the exploration & production sector, while Citigroup sees a trade in oil service stocks having “legs” after persistent weakness. Still, analysts are favoring larger-cap firms before diving all in. One of Wall Street’s top strategists highlighted the potential for energy equities to rebound, as cyclical segments of the market could present an opportunity.

Capital discipline, the central mantra in which drillers are living by, remains a key focus point for investors. Shale pioneers see output growth slowing next year, which could be a positive for macro commodity prices. Merger and acquisition potential in the E&P sector exists, but higher oil prices will be needed to revive deals given a “clouded fundamental backdrop,” according to Bloomberg Intelligence. 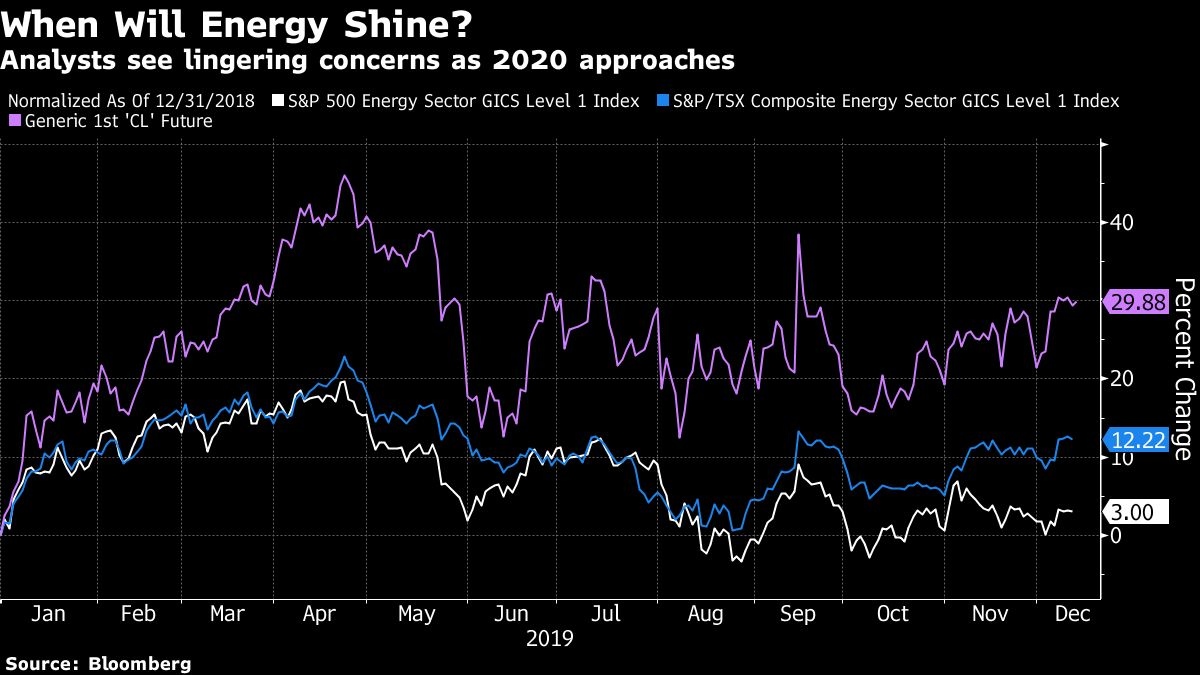 Here are some analysts picks on various sub-sectors:

• Morgan Stanley’s top E&P and integrated oil picks include ConocoPhillips, Noble Energy and Chevron. “The 2020 backdrop continues to favor large-cap and globally diversified companies,” the bank said in a note.

• CIBC Capital Markets likes oil-sands firms including Suncor Energy, and pipeline stocks such as TC Energy. “Our top ideas for the coming year might seem somewhat mundane, but we view them as logical and the right place in which to allocate capital,” the bank wrote to clients in a note.

• BMO Capital Markets favors Canadian energy firms relative to their neighbors down south as the northern group “appears to have largely addressed the lower for longer price environment, by restoring profitability even at these depressed prices,” Brian Belski said in a note.