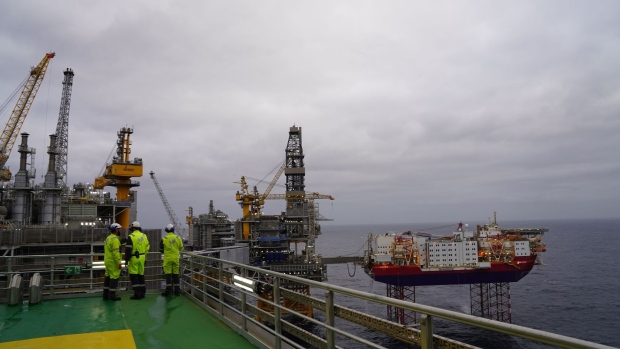 (Bloomberg) -- European energy trading is being strained by margin calls of at least $1.5 trillion, putting pressure on governments to provide more liquidity buffers, according to Norway’s Equinor ASA.

Aside from fanning inflation, the biggest energy crisis in decades is sucking up capital to guarantee trades amid wild price swings. That’s pushing European Union officials to intervene to prevent energy markets from stalling, while governments across the region are stepping in to backstop struggling utilities. Finland has warned of a “Lehman Brothers” moment, with power companies facing sudden cash shortages.

“Liquidity support is going to be needed,” Helge Haugane, Equinor’s senior vice president for gas and power, said in an interview. The issue is focused on derivatives trading, while the physical market is functioning, he said, adding that the energy company’s estimate for $1.5 trillion to prop up so-called paper trading is “conservative.”

“This is just capital that is dead and tied up in margin calls,” Haugane said in an interview at the Gastech conference in Milan. “If the companies need to put up that much money, that means liquidity in the market dries up and this is not good for this part of the gas markets.”

So far Germany has introduced Europe’s biggest scheme to backstop companies affected by the fallout of the war in Ukraine, setting aside 7 billion euros in loans to be made available to companies facing liquidity issues. German energy giant Uniper SE last week sought an extra 4 billion euros after fully using a 9 billion-euro existing facility, while Austria extended a 2 billion-euro credit to cover the trading positions of Vienna’s municipal power utility.

EU plans to intervene would be “sensible” for derivatives trading, Haugane said. Among the emergency interventions being discussed by the EU are price caps in power and gas markets. For Equinor, price caps in electricity could make sense, because power markets are more localized.

But in gas, such measures would be extremely difficult due to the global nature of the market. For example, Europe has to beat Asia on price to attract liquefied natural gas cargoes.

“Power is a local, i.e. domestic, market, so in this case it would be possible to do something governments could control,” Haugane said. “But the issue of a gas price cap is different, because the natural gas market is global, and hence not that easy to manage.”

The underlying issue of the gas market is a lack of supply, and price caps won’t ease the strain or add to reserves, according to the Equinor executive.

“It doesn’t create any solution to the problem,” Haugane said. “Gas is a global commodity, and we don’t have that much supply so there is not much we can do.”

The European Commission is also examining measures to help with liquidity. These could include credit lines from the European Central Bank, new products as margin collateral, and temporary suspensions of derivatives markets, according to a policy background paper seen by Bloomberg News.

The surge in gas prices over the past two years has produced a crunch not dissimilar to the financial crisis, said Anatol Feygin, chief commercial officer at Cheniere Energy Inc., the biggest US liquefied natural gas exporter. “There are few places to look other than central banks” for help, he said.

Still, there was some optimism at Gastech in Milan that the liquidity issues will be ultimately resolved.

“The recapitalization of the industry and re-balancing of portfolios is a question of quarters and not years,” Feygin said in an interview at Gastech. “The bridge financing has been available to date. So far everyone has managed to find a way because the industry ultimately performs: the physical volumes are delivered and the financial positions have been settled.”

In the future, market participants would probably lean toward large credit-worthy players, he said.

Likewise, the liquidity crisis has largely spared biggest trading houses, which are profiting from price volatility, while utilities bear most of the shocks, said Charif Souki, chairman of US LNG developer Tellurian Inc.

“I have not seen any of the major trading houses have a liquidity issue, they all managed to find lines of credits and bank facilities and they are all making more money than they have ever made,” Souki said in an interview at Gastech. “For the utilities in Europe, it is a serious issue because they are buying gas that is now all of the sudden is extremely expensive, and they are regulated by their respective governments.”

(Updates with comments from Cheniere and Tellurian from 14th paragraph)