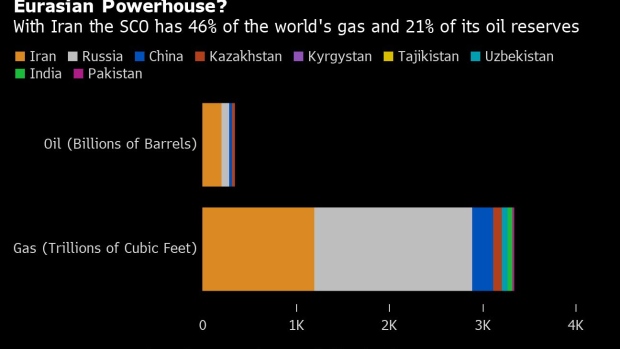 (Bloomberg) -- Energy traders weighing the probability of a revived nuclear accord between Iran and world powers might do better to train their gaze on Beijing rather than negotiations in Vienna.

That’s the conclusion reached by top security analysts using game theory to forecast the next moves in the star-crossed talks.

Calculating whether the U.S. and Iran will agree to rejoin the 2015 agreement, which limits Iran’s atomic work in exchange for sanctions relief, is key for oil markets facing tightening global supply. Nuclear talks have been frozen since the election of conservative cleric Ebrahim Raisi to the Iranian presidency in June but efforts resumed this week to find a way back to the negotiating table.

Success or failure rests increasingly on developments further east, according to policy advisers using quantitative methods to assess probable outcomes. Heading into the seventh round, China’s position will be key: will it join the U.S. in pressuring Iran to get back to a deal, or let Iran off the hook and offer it a giant market for its oil?

“A factor is needed to break the impasse and evolve the game into another context,” said Emilia Jose Peña Ruiz, a Spanish policy adviser who’s written extensively about how Iran’s energy reserves add weight to its negotiating power. And “Iran is increasingly turning toward the east.”

The Iranians are actively cultivating China as their “main economic escape route” from U.S. sanctions, Peña Ruiz said. That leaves the fate of a deal dependent on whether Washington is able to get China on the same page about Iran.

While Beijing largely recognized United Nations sanctions prior to the 2015 agreement, it’s opposed to unilateral U.S. penalties and has called for them to be lifted. Nonetheless, Chinese companies have largely curtailed work in Iran to avoid being locked out of the global financial system by secondary sanctions.

Game theory is a mathematical approach to decision-making used to predict outcomes, and policy makers have relied on it since the dawn of the atomic age. Methods developed by Nobel Prize winners like John Nash routinely inform nuclear planners about risk, while military officials incorporate it into simulations to test the strength of their battlefield approaches.

The complexity of the Iran talks, which also involve the U.K., France, Germany and the European Union, mean modeling optimal moves is a daunting prospect, with the choices made by each player influenced by what game theorists call asymmetric information -- the incomplete knowledge available about the situation and motivations of other players.

The “Iranian leadership may conceive of itself as playing a larger diplomatic game at the edge of the abyss, with many potential players that could defect or cooperate,” said Erika Simpson, a game theorist and former North Atlantic Treaty Organization researcher. “U.S. leaders continue to assume it is a two-player, high-stakes conflict.”

Meanwhile Iran, with the world’s No. 2 gas and No. 4 oil reserves, is seeking tighter integration with Beijing and Moscow to help replace sanctioned trade with Western economies. Last month, Tehran joined the Shanghai Cooperation Organization, a Chinese- and Russian-led economic-security alliance across central Asia.

Iran and China have also entered into a 25-year trade deal potentially worth billions of dollars, though the details haven’t been disclosed. And the Iranian government is engaged in talks with its main Gulf rival, Saudi Arabia, to end decades of hostility.

While China has repeatedly said that reviving the Iran deal is essential to maintaining nonproliferation norms, the lure of Iranian oil could outweigh concerns that Tehran may secretly develop a nuclear weapon. Four of the world’s nine nuclear powers are members of the Shanghai Cooperation Organization, with two of them -- India and Pakistan -- outside the Non-Proliferation Treaty.

U.S. negotiators have acknowledged they need Beijing’s support to resurrect the nuclear accord.

“Of course we have differences of views,” U.S. negotiator Rob Malley said of China and Russia during an interview with Bloomberg this month. “But they’ve also urged Iran to come back to the table and take a realistic position.”

Zhao Lijian, a spokesman for China’s Foreign Ministry, said Thursday that Iran has “reasonable demands” and called for an end to the U.S. campaign of “maximum pressure” against the Iranian economy.

Iran may well be calculating its next move based on whether it can play China and the U.S. against each other.

“Neither party demonstrates enlightened thinking,” said Simpson, referring to Iran and the U.S. “They fail to see a long-term and bold series of cooperative moves could move them away from the abyss.”