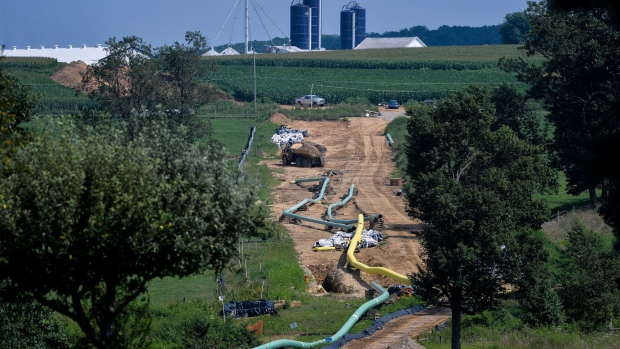 Sections of pipe sit near a farm at an Energy Transfer Partners LP construction site for the Sunoco Inc. Mariner East 2 natural gas liquids pipeline project near Morgantown, Pennsylvania, U.S. on Aug. 4, 2017. The Pennsylvania Department of Environmental Protection has issued four notices of violation after "inadvertent" spills of drilling fluids associated with horizontal directional drilling for the project. , Bloomberg

(Bloomberg) -- Energy Transfer LP confirmed it released gas from a pipeline where satellite data showed a methane leak, highlighting the uphill battle to curb emissions of one of the most potent global warming culprits.

The emissions detected by satellite this month near Pleasant Hill, Missouri, and analyzed by Kayrros SAS, appeared to stem from a pipeline maintenance practice known as blowdown, where gas is released to reduce pressure and ensure safety. Energy Transfer confirmed it was carrying out blowdowns as part of regular work on its Panhandle Eastern pipeline in the area.

“This work is ongoing and often necessitates that we blowdown the line to reduce its pressure,” the company said in response to questions. “In all cases, we put safety first while working to minimize our blowdown activities.”

A global shortage of natural gas ahead of the Northern Hemisphere winter is highlighting how critical the fuel still is for nations striving to transition to renewable energy and fight climate change. With that dependence comes the routine leaking of methane, a chief component of natural gas that has 80 times the planet-warming power of carbon dioxide over a 20-year period.

Satellite monitoring is increasingly exposing methane leaks, which are invisible to the naked eye, all over the plant. Many could be avoided, but it’s unclear if practices like pipeline blowouts can ever go away for as long as natural gas is used to generate electricity and heat homes.

Energy Transfer said it has installed “a reinforcement sleeve” to “minimize blowdown and venting” and leave gas in the pipeline.