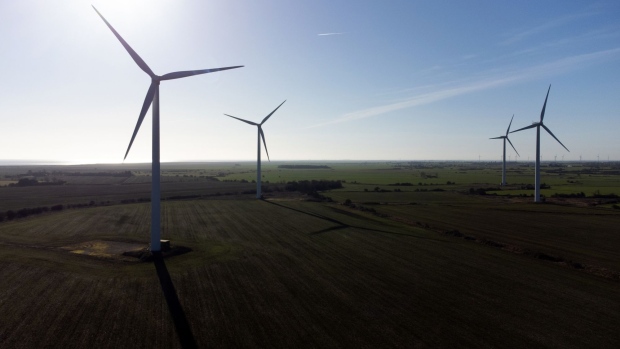 Wind turbines on the Bradwell Wind Farm, near to the decomissioned Bradwell nuclear power station, site of the planned Bradwell B project, in Bradwell-on-Sea, U.K., on Friday, Feb. 11, 2022. British regulators approved a Chinese-designed nuclear reactor that could be used at the plant in southeast England being developed by China General Nuclear Power Corp. , Bloomberg

A windfall tax on British utilities is “very short-sighted” and could risk billions of pounds of future investment in the UK, according to RBC Europe Ltd.

Such a levy could cost the country £100 billion ($125 billion) by 2030 if it discourages investors, RBC analyst John Musk wrote in a note. A large element of the government’s Energy Security Strategy would be “at risk” if the plans went ahead because of lower confidence in future investments.

Chancellor Rishi Sunak has asked officials to look at a windfall tax on electricity generators, as well as oil and gas companies, according to reports. That’s in response to record high energy prices that have led to big profits for generators but surging bills for households across the UK.

Among the most impacted firms would be Drax Group Plc, according to a note by Morgan Stanley analysts including Christopher Laybutt and Sarah Lester. Drax hasn’t spoken to the government about the tax and is focused on its bioenergy and hydropower developments, a spokesperson said in an emailed statement. Its shares dropped as much as 19% on Tuesday, the biggest fall in almost seven years.