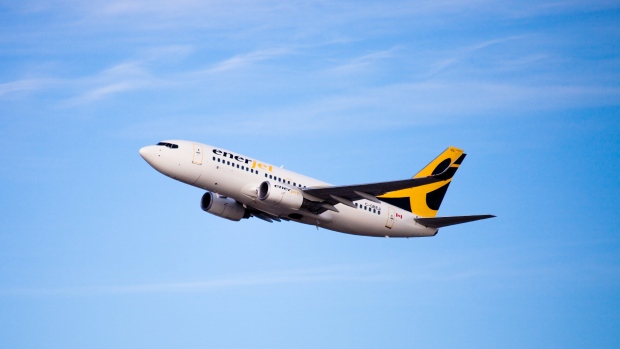 Calgary-based charter airline Enerjet announced Thursday that it will relaunch as a new ultra-low-cost carrier in 2019, backed by “significant financial commitments” from a group of prominent investors.

The carrier said in a release that by this time next year it will offer “a simple, ultra-low-cost fare structure” and fly to an “extensive” network of Canadian and U.S. destinations, but did not specify which cities.

The investor group is led by Enerjet CEO Tim Morgan – one of WestJet Airlines Ltd.’s co-founders – and features a number of well-known Canadian business figures. It includes Stephen Bronfman’s Montreal-based private investment firm, Claridge Inc.; as well as Stephenson Management Inc., which counts Mitch Garber as its chairman. Garber is also chairman of Cirque du Soleil’s board of directors and rose to fame in the gambling industry as chairman of Caesars Interactive Entertainment. Garber and Bronfman are familiar allies, and are currently leading a group of investors hoping to bring Major League Baseball back to Montreal.

The carrier also has the backing of Arizona-based Indigo Partners, which specializes in investing in ultra-low-cost airlines, including Singapore’s Tiger Airways and Florida-based Spirit Airlines.

“We believe there are millions of Canadians who would jump at the chance to have a simple, safe, and affordable alternative to the sky-high costs of air travel,” said Morgan, who will serve as the carrier’s chief executive officer, in a release.

In an interview with BNN Bloomberg’s Amanda Lang, Morgan said the airline will launch with at least three aircraft.

“Being an ultra-low-cost airline, price is the driver … and we have to having pricing that’s well below the incumbents and that’s our intention,” Morgan said.

Enerjet began operations in November 2008 with Boeing 737 Next Generation aircraft.