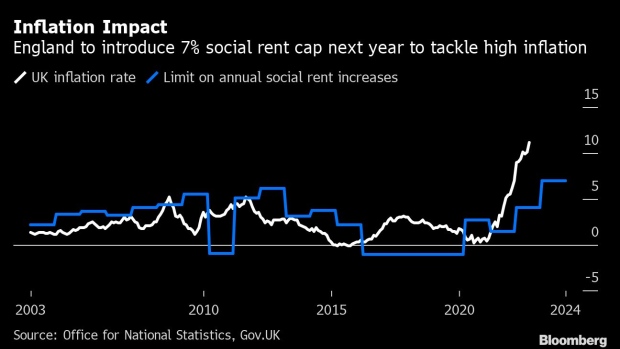 Residential apartments next to electricity pylons on the Barking Riverside development in London, UK, on Wednesday, Nov. 23, 2022. Barking and Dagenham is the only remaining London borough where house prices in the resale market have risen by double digits. Photographer: Chris Ratcliffe/Bloomberg , Bloomberg

(Bloomberg) -- Protecting tenants in social housing from the full effects of inflation is set to cost £3.2 billion ($3.8 billion) in lost income for England’s public sector landlords, according to a study by ratings company Moody’s Investors Service Inc.

The shortfall, which equates to about £600 million per year between next year and 2028, highlights the additional squeeze on housing associations and local councils already facing spending cuts and a shortage of properties.

Chancellor of the Exchequer Jeremy Hunt used his budget in November to cap social rent increases in England at a maximum of 7% in 2023-2024. The move is designed to help shield these tenants, who are typically low-income households, from the highest inflation in four decades.

Social rents could have increased by over 11% without Hunt’s intervention, based on September’s inflation rate of 10.1%, according to Moody’s, which downgraded its outlook to negative from stable for for housing associations -- the independent bodies that manage much of the country’s 4.4 million social homes.

“Housing associations will not be able to fully pass on the impact of high inflation on their cost base to tenants,” Moody’s analyst Giulia Calcabrini wrote in a report. “This will lead to an adverse differential between rental income and cost growth and will weaken housing associations’ margins.”

L&Q, one of Britain’s biggest housing associations, said the cap will reduce the rental income it can reinvest by £140 million over the next five years.

“The simple and stark reality is that this social rent cap will impact our development of new homes,” said Fiona Fletcher-Smith, chief executive officer at L&Q. “Our ability to tackle the housing crisis will weaken, as well as our vital contribution to the economy at a time of recession.”

Peabody Trust, which manages over 100,000 homes in London and the surrounding area, said the investment challenges facing housing associations are “significant and growing.” Ian McDermott, the company’s chief executive officer, said the rent cap policy was “the right thing to do” but warned it will affect the “much-needed supply of new social housing.”

Even with the rent cap, social landlords could still face a rise in arrears as the economy slows, further denting their margins, Moody’s said.

“Landlords will undeniably feel the financial burn,” said Simon Bath, chief executive officer of property technology firm iPlace Global. “Without sufficient income that rises in line with inflation and rising costs across the board, they may not be able to maintain homes.”

--With assistance from Chris Reiter.