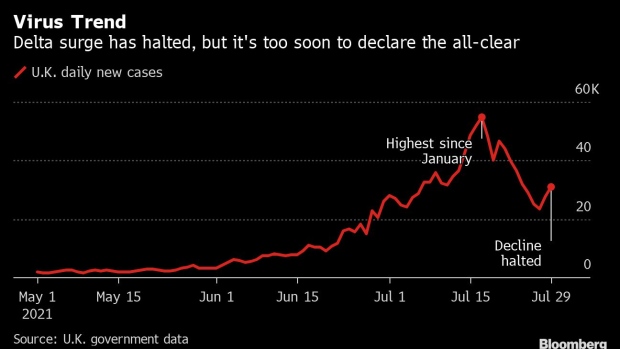 (Bloomberg) -- England’s Covid-19 infection rate unexpectedly rose last week, undermining hopes that the country was getting past the spike in daily cases earlier in the summer.The percentage of people testing positive rose to 1.57 -- the highest since January -- from 1.36, the country’s statistics office said Friday. It had been expected to decline after daily case rates dropped in the second half of July.

The daily numbers had suggested the U.K. situation was improving after the highly contagious delta variant sparked a new wave of infections. But medical experts and the government said it wasn’t clear what was behind the shift and that it was too early to say if the trend would be sustained.

That caution seemed justified as the figures increased again in recent days. On Thursday, the U.K. reported 31,117 new cases, up from 27,734 on Wednesday. While that’s still down from almost 55,000 on July 17, it was the second consecutive daily gain.

The report from the Office for National Statistics on Friday showed that 1 in 65 people are estimated to have had the virus in the week to July 24, compared with 1 in 75 the previous week. The period includes the immediate days after July 19, when the U.K. government relaxed Covid restrictions in what was dubbed “Freedom Day.”