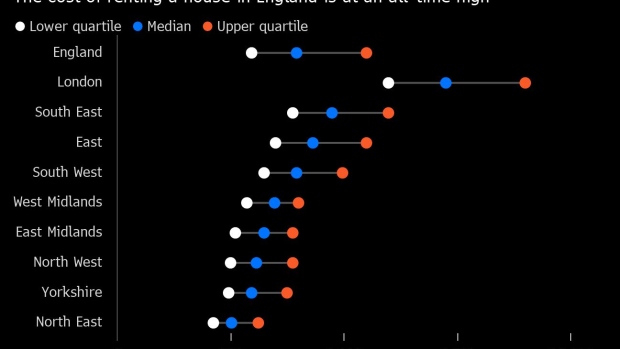 (Bloomberg) -- The cost of renting a home in England hit a fresh record in the year through March, heaping more pain on Brits suffering under a historic squeeze on living standards and threatening to make it even harder for first-time buyers to get on the housing ladder.

The median monthly rent climbed to £795 ($972), up nearly 9% from a year earlier, the Office for National Statistics said on Wednesday. In London, the reading was almost double that at £1,450.

The surge in rental prices also stands alongside a property market boom in the UK since the pandemic, which has driven the cost of buying to a record high.

Both will make the job of saving for a deposit even harder for those hoping to purchase their own home in a country where the average home now costs 7 times the average wage.

The median price of renting a three-bedroom property in Kensington & Chelsea, the priciest district in the UK, is more than £4,000 a month while a two-bed home in the City of London is almost £2,300.