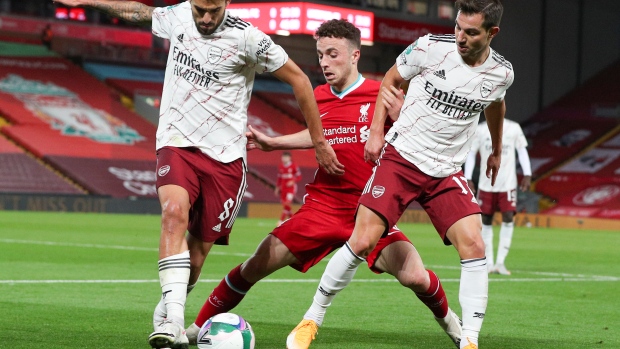 English soccer, known to global sports fans as the province of mega-rich players and billionaire owners, could be next in line for a coronavirus bailout.

Lawmakers are being urged by club owners to deliver financial remedies to the 72 clubs in the lower divisions of the English Football League to prevent the suspension of games and possible collapse of smaller teams. But government relief comes with an expectation that the 20 elite clubs that make up the cash-rich English Premier League would do their part in the form of a support package for the EFL.

Time is running out for smaller teams hobbled by empty stadiums and falling broadcast revenues resulting from the pandemic, according to club bosses, politicians and sports economists. A resurgence of COVID-19 cases in the U.K. has already derailed plans to begin inviting fans back to stadiums, meaning the cost of staging live games will soon be too much for many teams.

“Help is needed in the next month or two,” said Kieran Maguire, lecturer on soccer finance at the University of Liverpool. “The U.K. government has prevented lower clubs generating income through fans attending matches but is not willing to show the same kind of support it has given the arts and entertainment sectors.”

U.K. Prime Minister Boris Johnson has outlined a raft of economic measures to help key sectors including tourism and hospitality, as well as the arts, through the pandemic. His administration now faces pressure to do the same for the country’s most widely-followed sport.

“The football system in the country is genuinely one of the things that is world beating,” Charlie Methven, a co-owner of English League One club Sunderland, said by phone. “It’s utterly bizarre that the government threw 1.5 billion pounds at the arts industry but when it comes to football clubs the message seems to be let them get on with it.”

In its latest annual assessment of the European soccer industry, published in June, consultancy Deloitte LLP pointed to the high wage-to-revenue ratio that exists among England’s smaller clubs and said the pandemic had brought the long-term sustainability of their finances into “sharper focus than ever.”

While broadcast revenue continues to shelter the U.K.’s top clubs from the worst of COVID-19, those in the lower leagues at the heart of local communities are heavily reliant on match-day receipts and corporate event sales. The government last month put a halt on plans for crowds to return to sporting events starting on Oct. 1, citing a resurgence in the coronavirus pandemic.

“If we don’t have fans back by next spring and if we have to pay 5,000 pounds a week for coronavirus testing, I think that will be the straw that breaks the camel’s back,” said Philip Day, chairman of Grimsby Town, a club competing in the fourth tier of English soccer.

At Sunderland, revenue is running at around 10 per cent of normal levels, Methven said.

In late September, a group of politicians and soccer figures including a club owner and former administrators wrote to Oliver Dowden, U.K. Secretary of State for Digital, Culture, Media and Sport, requesting financial assistance for the lower leagues “before it is too late.” Dowden urged the EPL to step up and financially support the broader league network, but didn’t provide details on a potential government bailout package.

“I cannot comment on the details of the plan because it is currently being developed, but I can say that we expect and require the Premier League to work with the EFL carefully and closely and to make sure that they act sensibly and take their responsibilities seriously,” said Sports Minister Nigel Huddleston on Wednesday during a debate in Parliament. “I encourage the EFL and other bodies in all sports to take full advantage of all the other government support measures.”

“The government has been so inconsistent, saying we can test limited crowds and then withdrawing that,” said Nigel Travis, the owner of Leyton Orient, another tier-four club. “As for asking the Premier League to contribute, it never went to the big West End theaters to ask them to support all the community theaters.”

To be sure, EPL clubs, while financially better-placed to weather the storm, are also feeling the pressure. In its June report, Deloitte estimated about a 1 billion-pound hit to EPL clubs’ revenue for the 2019/2020 season because of the pandemic.

Paul Barber, chief executive officer of EPL club Brighton & Hove Albion, said top clubs are being asked for assistance at a time when they too have been told to roll back plans on bringing fans to games.

“We’re being asked to support the football pyramid without being able to support our own business by admitting fans, which we think we can do safely,” he said. Brighton staged a test event in August that involved about 2,500 fans attending a game under socially distant conditions.

“The harsh truth is that we should not have started until some sort of financial package was available,” said Nicola Palios, the vice chairman of fourth-tier club Tranmere Rovers, referring to the new season.