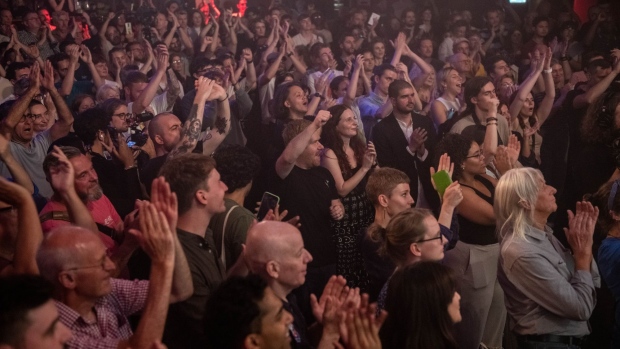 Dave Ward speaks at the Enough Is Enough rally in London, on Aug. 17. , Bloomberg

Organizers of a left-wing movement seeking to press the UK government into double-digit wage deals and cuts to energy bills say they’re closing in on a membership of 1 million following a launch rally in London.

The Enough is Enough campaign’s first meeting at the Clapham Grand theater, better know for hosting drag acts and club nights, was crammed to the venue’s 1,250-seat capacity, with hundreds more left outside, according to the labor unions behind the event.

The event late Wednesday came on the eve of the latest action by workers seeking pay hikes to match higher living costs as inflation soars.

Thousands of railway employees are striking across more than a dozen train operating companies and track and stations operator Network Rail Ltd. Thursday, with staff on the Tube and London buses poised to join in Friday. Felixstowe dockers will walk out for eight days from Sunday, while 115,000 Royal Mail Plc postal workers begin a series of walkouts on Aug. 26.

“We’ve had 400,000 people sign up for the campaign and by the end of the program tonight it will be 1 million,” Dave Ward, general secretary of the Communication Workers Union, said in an interview at the Enough is Enough launch. Ward, who represents Royal Mail employees, promised “rallies in every town and city across the UK.”

Under the slogan “It’s time to turn anger into action” speakers pledged to ramp up activism over the surge in household costs. In addition to higher wages and slashed energy bills, the campaign is seeking an end to food poverty, “decent homes for all,” and higher taxes on the wealthy.

Margaret Burn, 58, of Finsbury Park, London, attended mostly to hear Mick Lynch, general secretary of the National Union of Rail, Maritime and Transport Workers and a high-profile figure who says he’d back a general strike.

Several attendees at the rally, which resembled a music gig with a bar, vegan hot dogs and hits from the early 2000s blasting out, said they were fans of former Labour leader Jeremy Corbyn, who suffered a crushing defeat at the last general election to Prime Minister Boris Johnson after advocating a raft of left-leaning polices.

Indre Vidziunaite, a 30-year-old software engineer living in east London, said she had less time for current leader Keir Starmer, who is leading in the polls, and was hoping that Enough is Enough would encourage the party to adopt stronger leftist policies.

Labour Member of Parliament Zarah Sultana spoke at the rally and said that none of the campaign’s demands -- which include nationalizing energy firms -- is particularly radical and that “every single one of them is wildly popular.” She added: “Someone tell the leadership of the Labour Party.”

The latest round of rail strikes by members of the RMT and Transport Salaried Staffs’ Association has seen trains across Britain canceled.

A Network Rail spokesman said there’ll be no services at all on half the system on Thursday and Saturday, slightly less disruptive than during walkouts in July amid improved availability of staff in Scotland. On the remainder of the network, services have been reduced to only a fifth of the usual timetable.

The rail sector has been hit particularly hard by Britain’s so called summer of discontent, with drivers at the Aslef union also staging national strikes, as the government presses firms to modernize and trim costs in light of a drop in commuting following the coronavirus crisis.

The RMT’s Lynch said on Times Radio Breakfast that negotiations have so far failed to bridge differences, with “major problems in terms of what they want to do to the industry, which is to change it radically and change our people’s working lives.” He added that Transport Secretary Grant Shapps is blocking a deal and “needs to get out of the way.”

TSSA separately renewed calls for the railway to be brought back under public ownership Wednesday and said the current inflation-linked model for setting fares can no longer function as the Retail Price Index climbs. The Department for Transport has said January’s hikes will be lower, without specifying what they’ll be.

Thursday will also see a reduced service on the London Overground, Elizabeth Line and some London Underground subway routes. And on Friday, sandwiched between the mainline shutdowns, the whole of the Underground faces a one-day strike, just as bus drivers in the capital begin a two-day walkout.

Bus journeys in west and northwest London and parts of the counties of Hertfordshire and Surrey will be impacted, according to Transport for London.

Britain’s roads, already crowded with holidaymakers, are likely to suffer snarl-ups as a result of the strikes.

Traffic levels increased by 49% during June transport walkouts and by 36% last month, according to satellite-navigation software provider Waze. Bottlenecks are most likely on the M25 encircling London, the M60 around Manchester, the M5 linking the Midlands with the Southwest, and along the M6 that runs to the Scottish border.