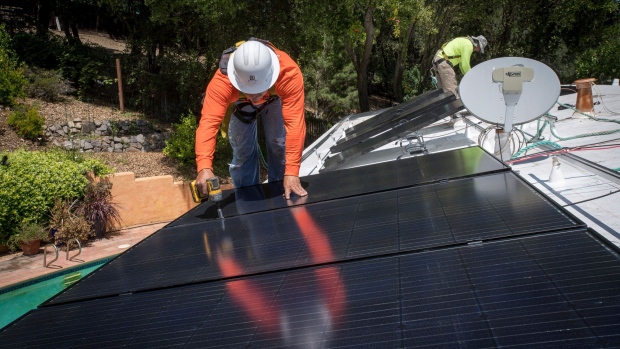 PetersenDean Inc. employees install solar panels on the roof of a home in Lafayette, California, U.S., on Tuesday, May 15, 2018. California became the first state in the U.S. to require solar panels on almost all new homes. Most new units built after Jan. 1, 2020, will be required to include solar systems as part of the standards adopted by the California Energy Commission. Photographer: David Paul Morris/Bloomberg , Bloomberg

(Bloomberg) -- Enphase Energy Inc. has devised a solution to the solar industry’s Achilles heel: its inability to electrify homes that haven’t got battery backup when the grid goes dark.

The maker of devices called microinverters that turn solar power into residential energy said its new product overcomes that hurdle and expands the potential market for renewables to homeowners who can’t afford costly battery systems.

Conventional microinverters shut off when grid power is interrupted. Until now, that has meant homeowners also had to install suitcase-sized battery units in the garage or elsewhere to bank power for later use.

“The industry has been waiting for this product for a long time,” Enphase Chief Operating Officer Badri Kothandaraman said during an interview.

Enphase shares have advanced about 70% in the past year.