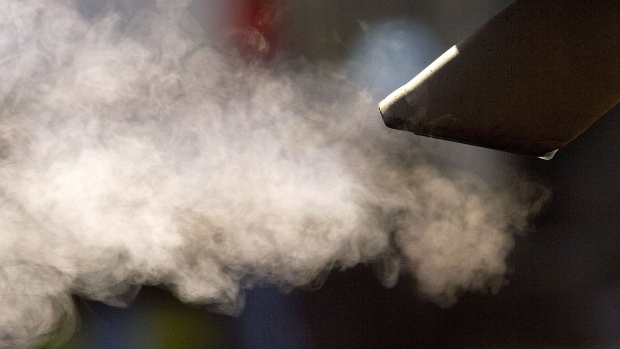 (Bloomberg) -- Environmental groups are urging President Joe Biden to floor it on his plans to place higher limits on greenhouse gas emissions from cars and trucks as some carmakers argue the current proposals are good enough.

The Environmental Protection Agency announced plans in August to mandate fleet-wide vehicle mileage of 52 miles (84 kilometers) per gallon by 2026, up from 40 mpg this year. The EPA has said its proposal would result in a 10% reduction in vehicle emissions in model year 2023 and then a 5% greater emissions reduction improvement each year after through 2026.

In comments submitted to the agency ahead of Monday’s deadline, the Environmental Protection Network, an organization comprised of former EPA employees, said the Biden administration’s proposal “makes the minimum progress needed to lay a strong foundation for reaching the longer-term electrification goals.”

“EPA’s goal should be the sale of near-100% zero-emissions cars and light trucks” by model year 2035, the group said in the filing.

The Detroit automaker said the Biden administration’s plan “is aligned with GM’s and the nation’s Paris Agreement commitments, and it achieves greater overall emission reductions” than understandings entered into by California and several car manufacturers. The company was referring to a 2019 deal between the Golden State and five automakers that call for manufacturers to voluntarily increase the average fuel economy of their fleets from 2021 levels by 3.7% per year, reaching an average of nearly 50 mpg by 2026.

Stellantis NV said it supports the first part of the EPA’s proposal, the agency’s “preferred” alternative, which keeps the previous emission rules for the next two years before a 10% reduction kicks in for 2023 and 5% further annual reductions continue until 2026.

“The preferred alternative strikes a better balance of ambitious targets with time to transition product line-ups necessary to support the projected mix of electrified vehicles by” model year 2026, the company said.

Ford Motor Co. did not respond to a request for comment on whether it submitted comments to the EPA.

GM, along with Toyota Motor Corp. and Stellantis, then known as Fiat Chrysler Automobiles NV, initially backed the Trump administration in a lawsuit challenging California’s right to set its own emissions rules. The companies eventually dropped the suit and lined up in support behind Biden’s plan, culminating with a White House event where Biden announced the proposal along side CEOs from all three Detroit carmakers.

The Alliance for Automotive Innovation, which represents most major automakers, said in comments submitted to the EPA “it is critical that EPA, NHTSA, Auto Innovators, auto companies, and other stakeholders work together to reduce greenhouse gas emissions and to enable a shift to electrified and zero emission vehicles.”

“Auto Innovators and our member companies are aligned with this administration’s goals and vision for addressing climate change and fostering a strong and competitive U.S. economy,” the group said.

“This proposed rule is the most expensive to date of the Biden administration; EPA estimates $150 billion through 2050,” Abigale Tardif, a regulatory policy analyst with Americans for Prosperity, which describes itself as a libertarian conservative political advocacy group, said in her group’s written comments.

“These new burdensome vehicle regulations will raise the price of a new vehicle by $1,044, constraining choice and replacing consumer preferences with politically preferred technology and fuels that hurt the most vulnerable citizens,” Tardif said.