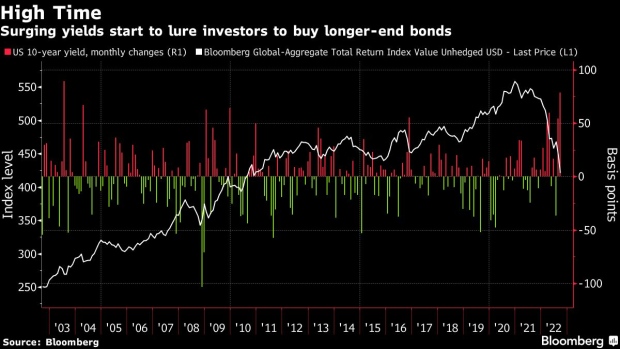 A passing pedestrian reflected in the Saint-Gobain Tower, home to the headquarters of Cie. de Saint-Gobain, in the La Defense business district of Paris, France, on Thursday, June 16, 2022. The global building materials manufacturer is likely to surprise the market again and keep its upward growth trajectory above expectations, according to Bloomberg Intelligence. Photographer: Nathan Laine/Bloomberg , Bloomberg

Longer-dated sovereign notes in most developed markets are starting to look appealing given that yields are at levels last seen in 2010, according to Arjun Vij, a money manager at JPMorgan Asset. Market expectations that inflation will ease in coming years render the securities an attractive proposition, he said.

“There’s a decent amount of value that’s been created in the long end -- it’s clearly cheap relative to recent history,” Vij said in a briefing. “If we had to start adding bonds today, which we are doing slowly, we’d like to buy the longer end.”

Vij, along with DoubleLine Capital’s Jeffrey Gundlach and Citigroup Inc.’s Steven Wieting, is wagering on government bonds in the belief that the global economy will eventually buckle under the weight of aggressive rate hikes. But with major central banks showing little inclination to ease the pace of tightening, they risk being saddled with outsized losses if the bets backfire.

US 10-year yields have increased almost 80 basis points in September to head for their largest monthly increase since 2003. The yield jumped as much as six basis points Wednesday to top 4% for the first time since 2010, before easing back to 3.97% later in the day. The global bond rout accelerated this week as the UK’s plan for large tax cuts reinforced fears of more rate hikes.

So far, there’s little sign that the market is about to turn. The Bloomberg Global Aggregate Index of government and corporate bonds has lost more than 20% since end-December as it slipped into the first bear market since its inception in 1990. Bonds maturing in more than 10 years have lost 33%.

Vij notes that shorter-ended notes may be a riskier play, given how markets are pricing in further steep rate increases from central banks. The Federal Reserve is expected to boost its target rate in November by 75 basis points for a fourth straight meeting, the swaps market shows, while the Bank of England is seen raising rates by at least double that amount.

JPMorgan Asset is concerned that swaps pricing for annual US consumer-price gains to fall below 3% in two years are underestimating how sticky inflation will be, Vij said, while adding that the money manager expects price pressures to slow noticeably.