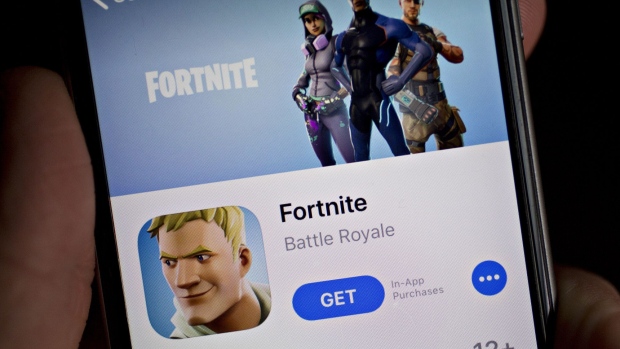 The Epic Games Inc. Fortnite: Battle Royale video game is seen in the App Store on an Apple Inc. iPhone displayed for a photograph in Washington, D.C., U.S., on Thursday, May 10, 2018. Fortnite, the hit game that's denting the stock prices of video-game makers after signing up 45 million players, didn't really take off until it became free and a free-for-all. , Bloomberg

(Bloomberg) -- Epic Games Inc. urged a federal appeals court to aside a September ruling that mostly rejected the gaming company’s antitrust challenge to Apple Inc. over its App Store.

Thursday’s filing escalates a battle that began in 2020 after the iPhone-maker removed the Fortnite game from the App Store because Epic created a workaround to paying a 30% fee on customers’ in-app purchases.

After a trial, U.S. District Judge Yvonne Gonzalez Rogers mostly sided with Apple, rejecting Epic’s claims that the iPhone maker is a monopoly. Still, she found that Apple has engaged in some anticompetitive conduct and ordered the Cupertino, California-based technology giant to allow app and game developers to steer consumers to outside payment methods on the web. All developers for the first time could be able to include a button and web links in their apps to let users pay for transactions online, circumventing Apple’s fees.

This case is part of Epic’s global campaign against the world’s most valuable company. Epic, which took in more than $5 billion from Fortnite in 2020, also has filed complaints against Apple in the European Union, U.K. and Australia, and the game maker is suing Google over its Google Play store.