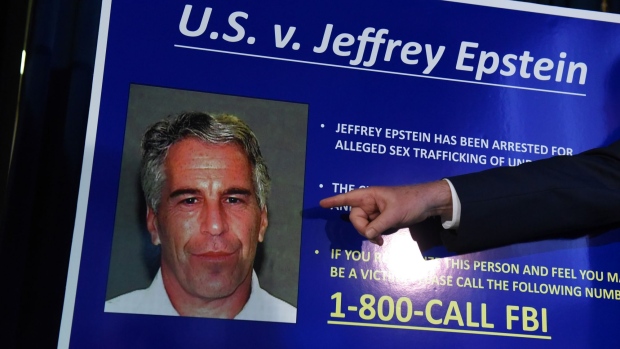 Among the bones broken in the late financier’s neck was the hyoid bone, located near the Adam’s apple for men, the newspaper said. While such fractures can occur in those who hang themselves, especially if they are older, they are more common in victims of homicide by strangulation, the Post reported, citing forensic experts and studies on the subject.

The office of New York City’s chief medical examiner, Barbara Sampson, didn’t comment on the injuries found in the autopsy, the Post said. After completing the autopsy, Sampson listed the cause as pending, according to the paper.

The death of Epstein, who was charged with molesting underage girls and sex trafficking, has prompted outrage among lawyers seeking justice for victims and set off a probe by the U.S. Department of Justice. Authorities are reviewing apparent irregularities related to Epstein’s death, including whether two guards responsible for him slept through checks of the prisoner they were supposed to conduct every 30 minutes and then falsified records to cover up the lapse, according to a person familiar with the probe.

The 66-year-old Epstein was found unresponsive in his Manhattan jail cell about 6:30 a.m. on Aug. 10 after an apparent suicide attempt. He was taken to a hospital where he was pronounced dead.

His death came less than a day after a court unsealed documents in a civil suit, which allege he and a friend sent a woman to have sex with a former governor, a former U.S. senator and an asset manager when she was a minor. All of them said the allegations were false.

A self-described “collector” of rich and powerful people, Epstein had links to a Who’s Who of prominent political and business figures. That circle, including former U.S. President Bill Clinton and billionaire Leslie Wexner, all distanced themselves from the financier after his arrest in July. Among those who once socialized with him was future President Donald Trump.

To contact the editors responsible for this story: Sam Nagarajan at samnagarajan@bloomberg.net, Reed Stevenson