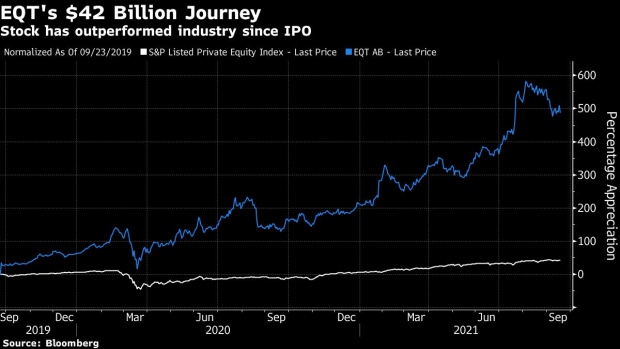 (Bloomberg) -- It was supposed to be a day of celebration for EQT AB Chief Executive Officer Christian Sinding, who presided over an initial public offering two years ago that turned a dozen partners into billionaires. Instead, the Swedish financial watchdog picked the anniversary to launch a probe into suspected market abuse.

The Financial Supervisory Authority opened an investigation after the firm allowed insiders to unload some of their holdings a year earlier than planned, cashing in on a fivefold surge in the stock. EQT’s partners netted $2.7 billion on Sept. 8, causing outrage among some investors. The stock fell as much as 8.1% on Friday.

Speaking in an interview on the eve of the anniversary, Sinding defended the controversial decision. He said the partners sold less than half of the amount they would have been allowed to sell next year when the lockup expired, that they would reinvest at least 50% of the proceeds into EQT funds and that it increased liquidity in the stock. The commitment to reinvest “we didn’t have before.”

“We of course thought about, ultimately at the core here, what will strengthen EQT for the long term,” said Sinding, 48. “So we started a process that ultimately was approved by the board, and that was to shrink the size of the sell-down, so we took that down by more than half. We also doubled the lockup.”

EQT flagged its share sale plan to the watchdog on Sept. 7, the day before it took place, prompting the regulator to ask EQT on Sept. 14 to explain why it had postponed publication of the inside information. After analyzing the firm’s response it decided to investigate the matter further, according to a statement on Friday.

The regulator’s probe centers around how the public was informed about the amended lockup, which was Europe’s largest secondary offering of the past year.

“The possibility of a unilateral change to such an agreement is a systematic credibility problem for the market,” Lars-Goran Orrevall, head of asset management at Skandia, said in an interview Friday with daily Dagens Industri. “The communication about the changed lockup agreement cannot be said to have been satisfactory.”

Sinding, who held a stake of about 3.2% in EQT before the share sale, said the criticism or questions that have been asked have been largely related to “some technical aspects of the situation.”

It’s a rare stumble for EQT, which prides itself on being transparent and by the book. The firm, created in 1994 by Sweden’s Wallenberg family, has grown from a small Nordic outfit into one of Europe’s biggest listed private equity firms with an ever-growing global footprint and a market value of about $42 billion, even after Friday’s slide.

EQT, like many of its competitors, has benefited from record deal flow and fund raising for the global private equity industry. Investors, keen to enter the private markets after years of ultra-low interest rates, have helped the sector amass an unprecedented $3.3 trillion of unspent capital, including $1 trillion held by buyout funds.

The Swedish firm’s assets under management soared to 71.3 billion euros ($83.5 billion) as of the end of June, a 36% increase from the year-end tally.

The day before the investigation was announced, Sinding exuded confidence as he spelled out EQT’s global growth ambitions.

The firm is hiring 150 people a year to expand further in the U.S., Europe and Asia, he said. One of its “key strategic goals” is to continue growing in the U.S., where 300 of its total 1,100 employees are based. While it’s already a big player in Europe, it wants to expand in several key markets where it remains small, including the U.K., Spain and Italy. Asia is largely untapped. With current valuations, he also anticipates more exits.

“We have a sense of urgency in everything we do,” Sinding, EQT employee number 11, said in the interview. “We think it’s better to make a decision and to move on than to wait to make a decision. We have an ability to execute quite quickly, we are not a hierarchical firm.”

Sinding said the company is open to growth through acquisitions. It agreed to buy Exeter Property Group in a $1.9 billion cash and stock deal in January, giving it access to real estate assets across the U.S. and Europe.

“Most of the time we are looking at smaller M&A opportunities,” he said. “Exeter was quite significant, because we needed to make a big move in real estate.”

But there are some challenges on the horizon, according to Nordea Markets.

“Growth rates are mathematically bound to slow down,” analysts Mathias Nielsen and Jakob Brink said in a note this month. “We believe EQT will reach a steady state in about 2030. Here, new fundraising will, unlike now, almost entirely be offset by run-offs in older funds. We believe the market has got carried away.”

Much of EQT’s success so far can be attributed to its relationship with the Wallenberg family, one of Europe’s most influential business dynasties. The family’s Investor AB is EQT’s biggest shareholder, with a 17.7% stake.

Marcus Wallenberg is EQT’s vice chairman and “he’s very active in guiding us, challenging us,” Sinding said. Investor AB CEO Johan Forssell is also on the board. “It gives some extra depth to the firm.”

Having relied on the Wallenberg connection since inception, Sinding said the IPO helped open more doors and accelerate growth.

“We have increased our client base with several hundred clients since we went public,” he said. “As we grow into new regions of the world, to attract people to EQT – when you are a well known transparent company – that opens up some doors that otherwise wouldn’t be open.”