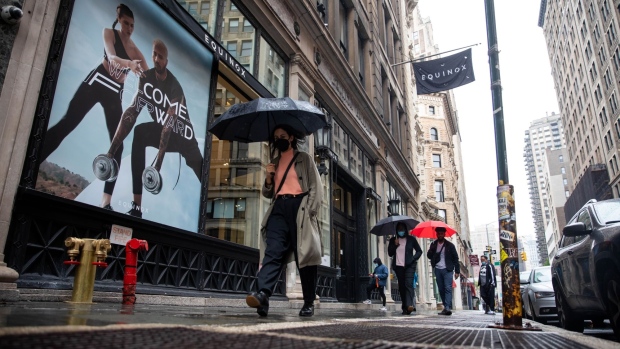 Pedestrians walk past an Equinox gym location in New York, U.S., on Wednesday, May 5, 2021. Equinox Holdings, the luxury gym operator popular among financiers and celebrities, has held talks to go public by merging with a blank-check company backed by investor Chamath Palihapitiya, according to people with knowledge of the matter. , Bloomberg

(Bloomberg) -- Equinox, whose gyms are frequented by Wall Street staffers among others, is in talks to go public through a merger with Ares Acquisition Corp. after talks with one of Chamath Palihapitiya’s blank-check companies collapsed, according to people with knowledge of the matter.

Deliberations are ongoing and may not result in a transaction, the people said, asking not to be identified discussing private information. The valuation couldn’t be learned.

Ares Acquisition raised $1 billion in its February initial public offering. It is backed by Ares Management Corp., an alternative asset manager. A co-founder of Ares Management, David Kaplan, is the SPAC’s co-chairman and chief executive officer.

Equinox held talks with Palihapitiya’s Social Capital Hedosophia Holdings Corp. VI earlier this year. That deal could have valued Equinox at more than $7.5 billion including debt, a person with knowledge of the matter said at the time.