U.S. equities climbed to within a whisker of their all-time highs after a pickup in hiring last month bolstered confidence in the economy, while a strong rise in hourly wages added to inflation worries.

Information-technology stocks rose the most in the S&P 500, with the index ending Friday’s session less than 3 points below its May 7 closing record after employers added 559,000 jobs last month, just below the average forecast. The Nasdaq 100 rallied the most in two weeks, driven by gains in megacaps including Microsoft Corp. and Apple Inc.

With stocks largely tranquil of late, traders are assessing Friday’s data for clues on the Federal Reserve’s next moves with regards to interest rates and asset purchases. Strong services figures on Thursday highlighted the rapid recovery in business activity, as the world’s largest economy rebounds from the pandemic.

“This is the second month in a row where the number has missed,” said Chris Zaccarelli, chief investment officer at Independent Advisor Alliance, referring to the hiring data. “This month the expectations were even lower, but we still missed. The short-term result is that the bond market will likely stay stable as there is less fear that the Fed will have their hand forced and the spillover effects should be a relatively stable stock market.” 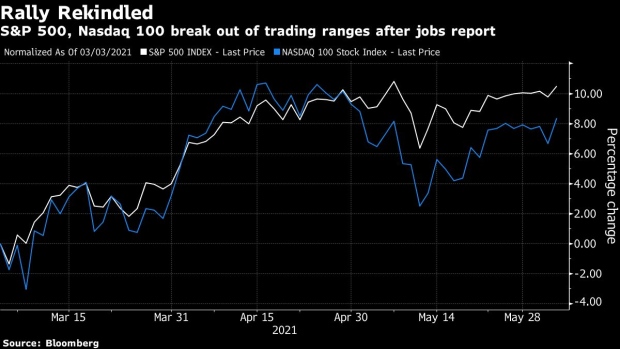 The Dow Jones Industrial Average closed less than 0.1 per cent below its all-time high, with Salesforce.com Inc., Microsoft Corp. and Intel Corp. leading gains. The dollar weakened against all of its Group-of-10 peers. Ten-year U.S. Treasury yields fell to 1.56 per cent.

Crude oil edged up, with prices posting a second weekly advance. The Bloomberg Commodity Index closed at a six-year high.