U.S. equities eked out a gain in choppy trading as investors continued to assess the outlook for inflation and the path of Federal Reserve monetary policy. Ten-year Treasury yields held at around the lowest since March.

Friday’s advance of 0.2 per cent came a day after the S&P 500 notched its first all-time high since early May as data showed U.S. consumer price increases in May were largely driven by categories associated with economic reopenings, bolstering the view that inflation pressures may ease later in the year. Treasury yields inched higher, with the 10-year rate still ending the week below 1.5 per cent.

Stocks swung between gains and losses in lighter-than-average trading volume, with gains in technology shares offsetting losses in the health care and real estate sectors. Vertex Pharmaceuticals Inc. fell the most after halting development of a key therapy. The volatility in the U.S. came after global stocks rallied. With the Fed setting a high bar for reconsidering its dovish stance, Thursday’s inflation report ended up stoking risk appetite across the world. Now investors are looking ahead to next week’s policy meeting for clues about the Fed’s next moves with regards asset purchases and interest rates.

“Our base view is still that growth and inflation remain buoyant and supportive of risk assets,” said Rob Haworth, senior investment strategist at U.S. Bank Wealth Management. “It’s been interesting to watch rates tick lower and stay lower. That seems to imply the market is believing the Fed is going to remain lower for longer and hold rates there.” 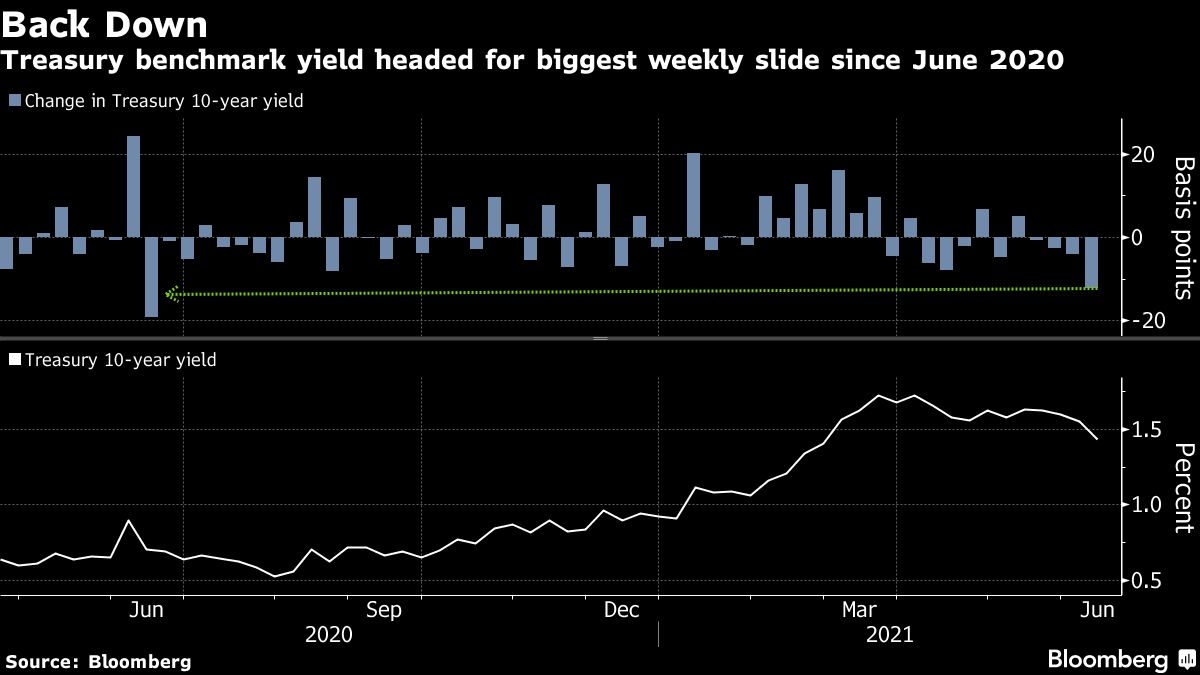 The U.S. central bank’s view that inflationary pressures are temporary has taken hold in global markets, signaling any changes in ultra-accommodative policy would happen very gradually. That approach was also reinforced across the Atlantic Thursday, as the European Central Bank raised its inflation forecast and renewed a pledge to maintain faster emergency bond-buying to sustain the euro area.

Eight of the main 11 S&P 500 industry groups rose on Friday afternoon, led by financial and technology stocks. Vertex fell to the lowest since October 2019 after halting its experimental treatment for an inherited disease that affects the liver and lungs. Its competitor, Grifols SA, climbed the most in seven months in Madrid.

The 10-year U.S. Treasury yield held below 1.5 per cent after falling to as low as 1.43 per cent on Thursday. The dollar rose against all of its major global peers.

European stocks rallied, with the Stoxx 600 gauge posting for a fourth weekly increase, as investors relished the prospects of continued policy support. A rally in emerging markets also underscored the return of risk appetite.

Elsewhere, crude oil prices rose amid an improving demand outlook. The Bloomberg Commodity Index fell from the highest level since 2015.